Kangana to adorn a Tamil Avatar for her new film 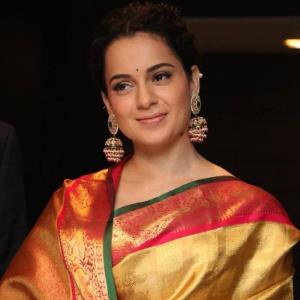 Kangana Ranaut kicked off the year with an awe-inspiring portrayal of the legendary Jhansi Ki Rani in Manikarnika. Post the success of her Directorial debut, Kangana had revealed that she will make a biopic on her life and was also thinking on the lines of a trilogy on female warriors. She was already recording sessions with K V Vijayendra Prasad, who has also written Manikarnika, on her biopic, when Vijayendra Prasad confided in her that he was writing another story like Kangana’s, and she should consider coming onboard for that. And hence began Ms Ranaut’s journey of Jayalalithaa biopic, a bilingual which is titled Jaya in Hindi and Thalaivi in Tamil.

Prior to the narration, Kangana had a different perception of the actress turned politician, and she revealed that the story was a revelation for her. “It presented an image of her that was contrary to the one I had in my mind, so I asked for some time to think over the film during which I read up some more on her and was blown away by what I learnt. It’s a story that needs to be told and I am happy to be telling it even though she was the absolute opposite of me”, she said.

When asked how Jayalalithaa was opposite of her, considering both the women have a strong personality and stood tall against odds, Kangana said, “She was far more docile and refined in her demeanour, more sophisticated in her choice of words and always ladylike no matter what she was going through. But if you tried to run her down, she would always bounce back. She’s risen over every controversy and adversity and I could identify with that spirit though our styles of expression were very different.”

Kangana revealed that contrasting facets of the Iron Lady, Jayalalithaa’s personality made the role even more fascinating for her. “She was emotionally dependent on some people, including her mother and MGR (actor-turned-politician), and allowed them to mould her into an actress and politician when she never wanted to be either. When they, and When they, and several others she had grown to rely on, left her, alone and vulnerable, she didn’t flounder. She took charge of her life and went on to become a bigger actress and politician. That’s remarkable, unbelievable!”

Apart from taking Tamil lessons, Kangana will also learn Bharatnatyam for the film, which will go on floors in October.