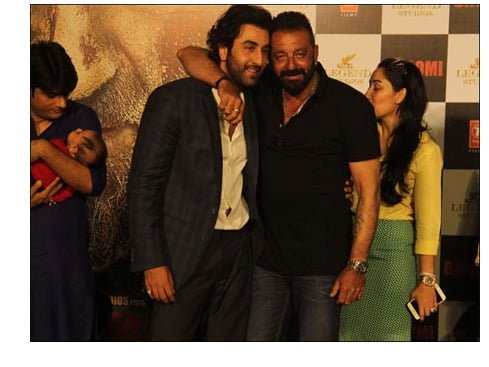 The trailer of Sanjay Dutt’s highly anticipated film BHOOMI was released today. Interestingly Sanjay Dutt’s close friend and filmmaker Vidhu Vinod Chopra and Rajkumar Hirani graced the event by their presence but the icing on the cake (and a pleasant surprise) was Ranbir Kapoor aka the reel Sanjay Dutt as the young actor is all set to play Sanju Baba in his biopic.

The presence of Ranbir, Vidhu along with the man of the hour Sanju baba himself made the event quite lively and enjoyable. Ranbir though plays Sanjay (known for his love towards fitness) in the biopic but in reality hates working out! Talking about the same Ranbir shared, “Yeah I was never a fan of workout and gym. And I remember I have been working out in Sanjay sir’s gym since last 10 years and after three years he(Sanjay) came down and said “Main tujhe teen saal se gym me dekh raha hoon. Koi difference toh aaya nahi hai tu karta kya hai yahan pe?” and this made everyone laugh their heart out.

The actor further shared how everyone had missed watching Sanju sir on screen and congratulated Sanjay and his BHOOMI team for the fabulous trailer and also welcomed him back to the movies.

Expressing how special is Sanjay Dutt for him and his film career, Rajkumar Hirani said, “Sanjay has been a very important part of my life and film career. I have made just four films out of which three had Sanju and the fifth one that am making is on Sanju so that should say how important he is to me. He did MUNNABHAI and the way he did it made that film great. I wouldn’t have been what I am without Sanju. It’s so magical to see Sanju back on screen as it satisfies our visual thirst of not having watched him on screen for so long.”
Vidhu Vinod Chopra sharing the same sentiment said, “I came to know the real Sanjay only once Raju started narrating the story of his biopic. I really haven’t met a man like him. I hope and pray to god that this film (BHOOMI) is what Sanjay Dutt deserves as a comeback film.”

Well we must say that it was really a very smart move to have Ranbir, Vidhu and Rajkumar (the team of Sanjay Dutt’s biopic) at the trailer launch of his comeback film BHOOMI as they not only got a chance to express their love and gratitude towards Sanjay Dutt but also promote his upcoming biopic as well.

Siddharth-Kiara wedding to have a special performance by bride's brother

Siddharth-Kiara wedding to have a special performance by bride's brother