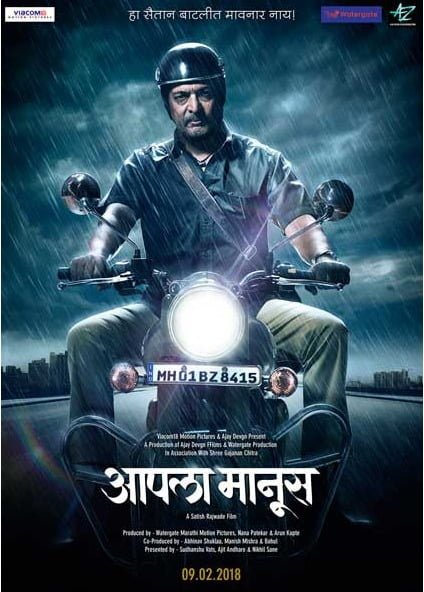 Viacom18 today announced its upcoming Marathi film AAPLA MANUS, the network’s first regional film of the year. Directed by celebrated director Satish Rajwade, AAPLA MANUS a family thriller has Nana Patekar, Sumeet Raghavan & Irawati Harshe in lead roles. The film explores the story of a young couple living with the man’s father, juggling the pressures of urban life and managing the complexity of relationships. An unexpected incident forces them to question their beliefs about their life and family.

Speaking on the development and partnership between Ajay Devgn FFilms and Viacom18 Motion Pictures for regional movies, Ajay Devgn said, “Over the past 25 years of my film career, my relationship with my audience and fans has only become stronger. The support and love I have received over the years has made me always want to give more to my fans. As a producer, AAPLA MANUS, is my first attempt to showcase my gratitude to the people of Maharashtra and I hope it will get
appreciated by all. Our already existing relationship with Viacom18 extends in regional cinema too with this film.”

Commenting on the upcoming venture, Ajit Andhare, COO, Viacom18 Motion Pictures said, “We have seen enormous audience growth in the Marathi filmscape in the past few years; not just in terms of box office performance but also in terms of the variety of genres. AAPLA MANUS is a thought provoking film that will move the viewers and question perspectives. As we embark on this journey together with Ajay Devgn FFilms, Watergate Marathi Motion Pictures & Shree Gajanan Chitra, we are certain that the movie will stand out from the clutter. With the goal of strengthening the regional cluster of Viacom18 Motion Pictures, we are confident that this partnership will prove to be a win-win for everyone.”

Speaking about this association, Nikhil Sane, Business Head – Viacom18 Motion Pictures Marathi and Colors Marathi, said, “Marathi cinema has evolved and come a long way especially in the last 5 years. It has made its mark like none other with his innovative storytelling and novel concepts. AAPLA MANUS will be Viacom18’s first production venture in 2018. With a powerhouse performer like Nana Patekar and a gripping narrative, AAPLA MANUS will trace the journey of a family dealing with a crisis and a constant threat of something unexpectedly ominous unfolding in their lives. It is a discerning film and I am sure that it will resonate with the audience.”

AAPLA MANUS will hit the silver screens on February 9, 2018.