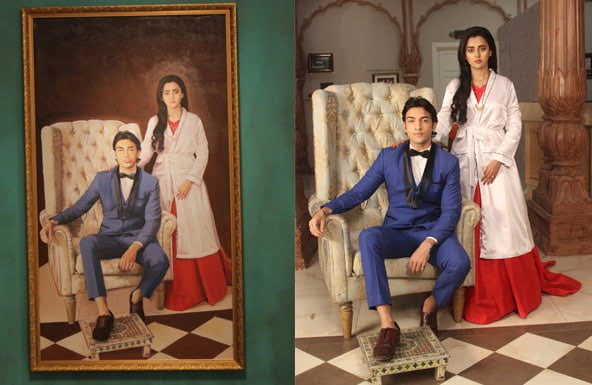 Sony Entertainment Television’s ‘Rishta Likhenge Hum Naya’, has been much appreciated by the audiences. Tejasswi Prakash and Rohit Suchanti effortlessly fit the role of Diya and Ratan. With the wedding of Diya and Ratan, there will be a twist in the tale or maybe a new love story to begin? The story shows Rajasthani tradition, however, soon we witness a dress drama in the show where we will get to see Diya and Ratan donning a Victorian look.

In the upcoming track, as per the family tradition the portrait of Diya and Ratan will be made around Victorian theme. Ratan is excited on the other hand Diya is nervous as it is difficult for her to adapt that personality and had to undergo proper grooming. But that’s not what it is, the photoshoot goes wrong and we will get to see one of the most unusual royal portrait just like that of their story, where Diya will be in bathrobe over a Victorian gown.

Tejasswi shares, “This was one of the funniest scenes we shot for, though it will look serious on screen but behind the scene it was super exciting. I have always loved dressing up in different cultural costumes and Victorian looks are way to classy ones but apparently because of the scene I won’t be seen in one.”

When contacted Rohit he said, “We had a lot of fun while shooting the royal portrait sequence. I sat with the creative team and gave in the inputs to get the exact look that was needed. So it felt like a great collaborative effort and the results have turned out great.”

Twitter
Flip
Koo
Previous article
OMG Sonakshi Sinha considers this film with Ajay Devgn to be her worst!
Next article
Sonam Kapoor: No point in doing just entertaining cinema anymore
This May Also Interest You
News