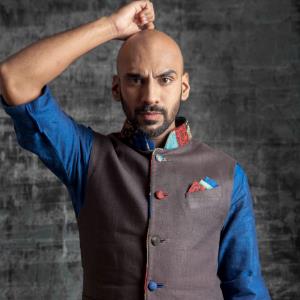 Sahil Khattar, who hails from Chandigarh, is making his Bollywood debut with the film 83' on India's 1983 World Cup victory in cricket. Sahil is playing the role of Syed Kirmani.

In the film being made on India's 1983 World Cup victory, Sahil Khattar is playing Syed Kirmani, batsmen and wicket keeper. Hailing from Chandigarh, Sahil, who started out as a YouTuber, and then TV anchor, is making his Bollywood debut with this film. Coincidentally, Sahil is the third actor from Chandigarh to feature in this film, after Ammy Virk and Harrdy Sandhu. While the excitement for a debut is obvious, what Sahil is really kicked about is the fact that, "I was always sure of making a big debut, but didn't realise it would be this mammoth," he says. "Though shooting is yet to begin, the announcement has been made, and I never knew that I would become an overnight actor without shooting for a single day, and have more offers pour in too!" he chuckles.

Talking about his role of Kirmani, whose partnership with Kapil Dev, to be essayed by Ranveer Singh, in the World Cup created history, Sahil says, "Mera Chandigarh connection yahan bhi kaam aya. Kapil paaji is also from Chandigarh." For Sahil, who has gathered varied experiences in sports, first as a roller skating player from St Stephen's and DAV College -10, Chandigarh, then as a TV anchor for FIFA, Kabaddi and cricket, debuting with a sports themed film, "felt like all my life's experiences are coming into line." He adds, "I flunked class XI in Govt Model Sr Sec School, Sector 16, Chandigarh, because I bunked classes to play FIFA on console. I didn't know that one day I would be hosting FIFA on TV."

Though shooting is yet to begin, Sahil has been practicing his part since two months. "A wicketkeeper does a lot of lunges and squats, and I have been diving like a maniac. lske baad mein 20-20 ke trials de skata hun. Rishabh Pant ke baad abb naya naam ayega, Sahil Khattar," laughs Sahil who says he got the part due to his bald pate. "What really worked in my favour was my real look, which I have never changed. Like my dad said, take a liability and turn it into an asset and see the world revolve around you. So, my liability was of not having a full hair on my shoulders, and Kirmani's role came

What also appealed to Sahil was that Kirmani was the quirkiest cricketer in the squad. "I believe, there is no perk without quirk. And this character totally sums it up," he says, adding that he is glad he left some big film offers previously. "I left them because I didn't want to be under anyone's umbrella. It might sound cliched but I believe in creating my own umbrella, even if its a small one. Whether its the Khans, or newer generation actors who asked me to play their friends, I refused. Playing hero's friend is the black hole of characters. Once you get stuck, you can never come out of it. Kirmani is iconic, and this is what catapulted me into this role."

Speaking of quirky, coming from a person who has stood out because of his oddities, we ask, is quirky sellable in contemporary cinema? "Hero ka zamana chala gaye hai, abb actors ka zamana hai," he replies, "I don't look like a hero, yet they put the film on my shoulders, indicates something. Its true, content wise, quirk is selling, because people want to connect with content. And internet has made content relatable."

For one who mastered the digital platform, went on to TV and now films, Sahil seems to be tracing a trajectory in reverse of what conventional actors do. That is because now everyone wants to juggle all audiences – digital, TV, Bollywood, which is what I began with." Yet, Sahil says the one commonality for success across platforms remains content. "I ran this show, Every Punjabi in the world, which every Punjabi has seen. I meet people in Banaras, Pondicherry and they quote me on my dialogues. Its not about the looks and direction anymore, it's about acting and storytelling".

Twitter
Flip
Koo
Previous article
Checkout Farhan Akhtar on the cover of HELLO magazine!
Next article
Pewdiepie admits losing to Bhushan Kumar’s T-Series in a song
This May Also Interest You
Sports