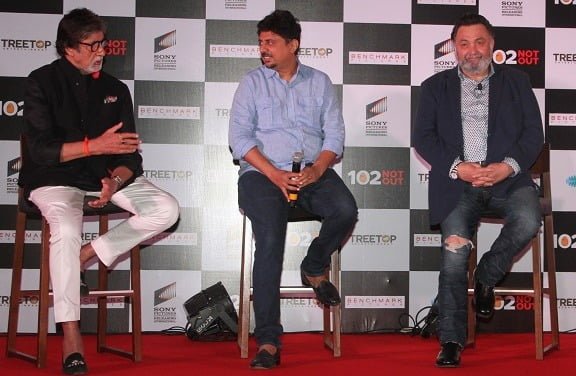 Unbelievable but true, the icon for the icons Mr.Amitabh Bachchan has blamed the director of 102 NOT OUT to chopping off his favourite scene from the unique slice of life cinema that is enthralling and entertaining the audience.

Yesterday, the makers of 102 NOT OUT and its cast and crew held a special gathering with media and exchanged rare anecdotes with the select media friends. During the ongoing banter with the media fraternity, Mr.Bachchan made a shocking revelation blaming the director of the movie for deleting his favourite scene from the film.

On quipped, the megastar shared the scene which comes after the introduction of his character Dattatraya Vakharia in the movie. Those who have seen the movie know that the character of Mr. Bachchan is introduced in an amusing manner when the 102 year old Dattatraya Vakharia holding the cut out of the record holding Chinese super centenarian enters a rickshaw and initiates an intriguing conversation with the auto rickshaw driver asking him to share his nostalgia of his home town. Much to the surprise and amusement of the auto rickshaw driver and the audience, Dattatraya Vakharia adds funnily that he has traveled half of India through such conversations. The auto wala reacts with amusement and we see Mr. Bachchan laughing seating behind.

But in reality, there was more fun to that counter which also made a sly comment on the way today’s music is going. Sharing the part which got deleted, Mr. Bachchan said, “After inquiring about the nostalgia from his home town, Dattatraya asks what music he has and request him to play Rafi, Kishore etc. the rickshaw driver says that he is not having the collections of those legends and offers Dattatraya to give his ear to the latest music, on hearing this Dattatraya in his trademark tongue and cheek manner says phir toh tu bhoobu hi baja (in that case play the horn instead) and laughs. ”.

This was my favorite scene which cemented the colour and vigor of my character in the film but he deleted it giving the reason that we want to come to the point on time Amitji, we cannot waste time” Mr. Bachchan concluded pointing fingers towards the director Umesh Shukla.

The sequence was shared by Mr. Bachchan in his impeccable comic style which made the gathering present go LOL. Whether the makers will add that portion after this we don,t know but certainly even without this late inclusion, 102 NOT OUT starring Mr. Bachchan and Rishi Kapoor remains a rare coming of age cinema on life and light, in case if it gets added then it will be ‘sone pe suhaga’ (icing on the cake) we mean.