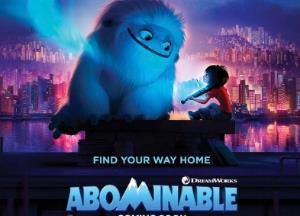 "Abominable", a heart-warming film about love, trust and friendship, from the makers of "How to Train Your Dragon" and "Kung Fu Panda" — DreamWorks Animation — is set to release in India in 3D and 2D on September 27.

Co-produced by Pearl Studios, "Abominable" narrates the tale of a wide-eyed, mystical creature, a Yeti named Everest and his newly found friend, Yi and their 2,000-mile adventure from the streets of China to Himalayan snowscapes, all the way to Mount Everest.

With DreamWorks' animation, it has Jill Culton's direction and storytelling. It is also a directorial debut for Culton who in the past was an animator and storyboard artist on "Toy Story", "A Bug's Life" and "Toy Story 2".

"Abominable" will be distributed by Universal Pictures in India.