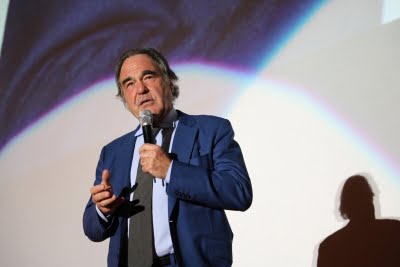 As Red Sea Film Festival jury President, Oliver Stone is taking his role seriously, reports ‘Variety’. He sees the festival as an opportunity to explore the cinema being made in a region that he views as being misunderstood.

“It is a chance to really dip into the very fascinating Asian and African cinema. There’s a lot of big changes going on. You know, there’s a whole new world and they’re learning how to use film to tell their stories,” Stone said in an interview to ‘Variety’.

The director of such cult classics as ‘Platoon’ and ‘JFK’ alluded to these changes in his remarks at the opening ceremony: “You see the changes that are coming here, the reforms. I think people who judge too harshly should come and visit this place and see for themselves.”

It was a remark that was bound to trigger a controversy among critics of Saudi Arabia’s human rights record. But Stone is unrepentant.

“I meant what I said,” he said, according to ‘Variety’.

The acclaimed director added: “Human rights, Jesus Christ! (…) America should look to itself with Julian Assange before they start criticising other people. Because that’s the worst case I’ve heard. […] America has certainly got a long list of crimes. I do not think they should be pointing any fingers at anybody.”

He continued: “Now they’re arguing about women in Iran? What about here? They’re making tremendous reforms for women. They can’t mention that? You know, all they mention is a murder several years ago. There’s a lot of murders that go on in their country. What they’re doing to Assange is, in some ways, worse than cutting up somebody. It’s killing them slowly. Right. Okay. Enough said.”

The “murder several years ago” is a reference to the killing by Saudi government agents of Jamal Khashoggi, the Saudi American dissident, in 2018.