Diesel hints at John Cena’s entry in FAST AND FURIOUS 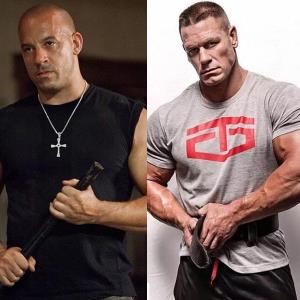 Actor Vin Diesel on Friday hinted that wrestler-actor John Cena is coming aboard for the ninth instalment of the FAST AND FURIOUS. Diesel uploaded a video on Instagram in which he spoke about the film and his co-star late Paul Walker, who died in car crash in 2013. Towards the end of the video, Cena appeared into the frame wearing a blue suit. The actors even shared a smile with each other.

"Guys, as you know I'm always thinking Fast, and I'm always thinking about the responsibility of making something iconic and deserving of your loyalty. I know this sounds crazy but every blue moon I feel like Pablo (Paul) up there sends me someone, another soldier for the fight for truth. Today, someone came by that speaks to what Pablo would have brought me. All love," Diesel said.

Cena had earlier expressed his desire to join the team of FAST AND FURIOUS saying "it would be a dream to get the opportunity".

Launched in 2001, the franchise is about illegal street racing, heists and espionage. The ninth part is scheduled to release in 2020.