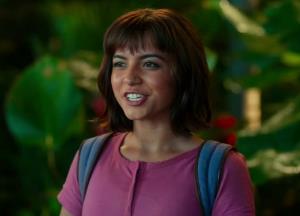 Dora The Explorer, one of the most loved programs of children is now turned to a movie. Here we see Dora, a teenager who has spent most of her life exploring the jungle with her parents, now nothing is more challenging than facing her worst fear – high school.

Dora quickly finds herself leading Boots her closest companion, Diego, her cousin, and a ragtag group of teens on an adventure to save her parents and solve the impossible mystery behind a lost Inca civilization.

Paramount Pictures released a second trailer giving a more detailed glimpse of it.

The movie stars Isabela Moner, Eugenio Derbez, Michael Peña, Eva Longoria and Danny Trejo in the main role. The film is directed by James Bobin and presented by Paramount Pictures. The movie is slated to release on August 9, 2019.

Will she be able to unveil the mystery behind a lost civilization. Check the trailer below.