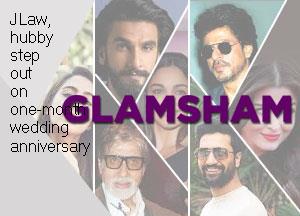 New York, Nov 20 (IANS) Actress Jennifer Lawrence and her husband Cooke Maroney were spotted together on their one-month marriage anniversary.

The 29-year-old actress, who married art dealer Maroney at a luxurious mansion in Newport, Rhode Island, on October 19, was seen wearing her wedding band for the first time, reports people.com.

The pair were photographed leaving New York’s Museum of Modern Art, before heading to a restaurant in SoHo neighbourhood on Monday, and close up photos show Lawrence wearing what appears to be a thin band below her gigantic emerald stone, which also sits on a delicate band.

She looked winter weather-ready in a cream-coloured coat with Burgundy mules and a leopard-print handbag.

While this doesn’t mark their first outing as newlyweds (they were seen in New York two weeks after their lavish ceremony), it does mark the first time Lawrence has been seen wearing her new wedding band.