Robert Pattinson and Rami Malek have a mini Twilight reunion 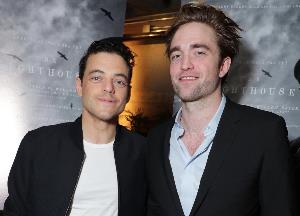 Robert Pattinson attended the screening of his new movie 'The Lighthouse' at the 13th Annual GO Campaign Gala, which took place at NeueHouse in Hollywood where he bumped into his Twilight co-star Rami Malek.

The event was hosted by Chris Evans and Rami Malek which took place on Saturday night (November 16) at the London Hotel in Los Angeles.

It's been almost seven years since the final movie from the Twilight franchise, The Twilight Saga: Breaking Dawn – Part 2 was released. The Batman actor took out a couple of hours from his busy schedule to participate in the event and joined Rami Malek to pose for the cameras.

Pattinson looked dashing in a stylish suit and white shirt. Whereas Malek, who plays the villain in the upcoming Bond film titled No Time To Die, sported a casual look at the event.

During his speech at the event, Robert Pattinson recalled the first time he attended the event before he became an ambassador for the GO Campaign in 2015. "I was so impressed with the organization that I just wanted to get involved. Every year, it's a joy to see it get bigger," Pattinson said.

On the work front, Pattinson has signed two huge projects. The actor will be next seen in Christopher Nolan's TENET and Matt Reeves' The Batman. Rami Malek will be seen in the 25th James Bond film, 'No Time To Die' opposite Daniel Craig.