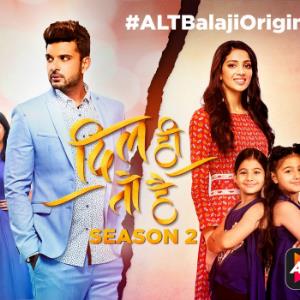 Keeping the audience hooked with its interesting story-telling and strong characters ALTBalaji’s Dil Hi Toh Hai season 2 is all set for a fascinating finale. Having set a benchmark on the Indian OTT space, the web series has kept the audiences at the edge of their seats with their each and every episode. This complicated and tangled love saga of Rithvik (Karan Kundra) and Palak (Yogita Bihani), that was filled with a whole lot of confusion and misunderstandings, finally seems to be freeing the knots that existed, as our leading man Rithvik gets to know about the things being hidden from him. While destiny may try its very best to reunite the pair in the final episode, it looks like Rithvik has other ideas running in his head.

In the previous episodes, where the audience witnessed a baggage full of drama, twists and turns, the finale episode was no less than a surprise, for the viewers. Rishabh’s truth comes out in the open, not only this, Rithvik also learns that Palak had left him at Mamta’s behest. Where on one side we see Vijay Path Noon finally accepting Palak and making amends, whereas on the other end, a shattered Rithvik, disappointed with his actions, decides to leave the country.

How will Rithvik face his injustice towards Palak? Will the finale episode finally take this beautiful story towards a happy ending? It seems to be an episode you certainly do not want to miss out on as all these questions will be unveiled in the upcoming final episode of Dil Hi Toh Hai 2.