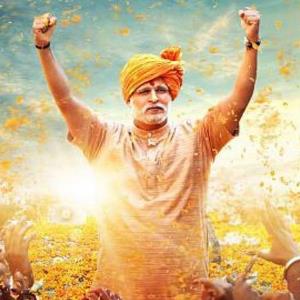 Does it stay true to the incredibly inspiring journey of our beloved Prime Minister Shri Narendra Modi who has made history again in the 2019 elections? Find out in the review of PM NARENDRA MODI

Mitron, Bhaiyon or Behano (friends, brothers and sisters), In reality, this ‘unofficial’ biopic is the more essential and necessary for an actor like Vivek Oberoi and not the charismatic Indian leader. In fact, if I say Vivek Oberoi has tried to cash on the popularity of Modi and the election fever (considering his initial release date) then it won’t be wrong in my opinion. This movie is an attempt by Vivek Oberoi to revive his acting career.

Just prosthetics is not all. You should have the body language, mannerisms, study, understanding of the vocabulary even if you intend to look entirely at the glories and white wash certain facts for a pleasing fan worship kind of a story. First of all, Vivek Oberoi is no Mammootty (DR. BABASAHEB AMBEDKAR), Sir Ben Kinsley (GANDHI), Paresh Rawal ( SARDAR) or Nawazuddin Siddiqui (THACKERAY), to that matter but still.

It’s so sad that Vivek Oberoi is not even Vivek Oberoi we know in this movie. He tries to be Modi and fails so miserably that it feels pity for the ‘poor’ actor who is trying so hard but. Just occasional Guajarati accent doesn,t qualify and if Vivek would have given a screen test for any other production for this role, he would have been rejected out rightly.

Omung Kumar’s direction in PM Narendra Modi
As Vivek is no Mammootty, Rawal or Siddiqui, Omung who has made a bearable MARY KOM and terrible SARBJIT is no Steven Spielberg (SCHINDLER’S LIST), Jabbar Patel (DR. BABASAHEB AMBEDKAR) or Richard Attenborough (GANDHI) either. But here Omung delivers a craft which even the amateurs won,t approve off.

He reduces the icons of Indian politics into caricatures and makes us wondered whether it is a parody or sadly it has turned into an unintentional comedy. Omung creates an apology in the name of movie making and more disturbing is the fact that he is unaware. The movie traces the journey of our Prime Minister from his childhood – those tea-selling days to his landslide win in 2014.

The cinematic richness in Modi’s story from chaiwala to one of country’s biggest and most influential leader is told without any vision and conviction. Without getting into the nitty gritty of politics, I don,t remember how nay times the famous words ‘Mitron’ ‘Bhaiyon or Behano’ is uttered in this miserably failed attempt.

The writers Sandip Ssingh (story) and screenplay by Zafar Mehdi, Anirudh Chawla and Vivek Oberoi in their extra cautious attempt in not to touch the controversial parts, fail to make even a good hagiography.

They rob the movie’s potential of being an inspiring, motivational saga on screen with elan. Modi’s childhood days, the guide episode, Modi’s journey from childhood and how the boy transforms into a mass leader at a time when the country is begging for a change could have been the movie every Indian wants. Sadly it ends as a movie only the makers and Vivek’s fading career wants.

There is a breather in this suffocation, Boman Irani part is somewhat convincing though it’s quite filmy and the joy of watching Dev Sahab on screen.

Joshi as Amit Shah, Anjan as Atal Bihari Vajpayee, Prashant Narayanan as the sinister businessman all are reduced to caricatures. Its Darshan Kumar as the ‘bikaau patrakar’ and Zarina Wahab as Heeraben to an extent that infuse some life in this emotionally dead piece of art.

PM Narendra Modi starring Vivek Oberoi and helmed by Omung Kumar does a double murder of itself, when you watch it on screen you find Vivek and the movie completely out of sync and when you go home and switch on the TV channels to hear about the incredible, historical triumph of India’s most powerful leader at present – Shri Narendra Modi, you feel sorry for the desperation of the people behind to cash on the iconic leader.

Mitron, Bhaiyon or Behano, our PM Shri Narendra Modi doesn’t require such artificial, soulless glory in ‘reels’, Modi is an experience that is experienced best in ‘real’ and a true Indian knows it.