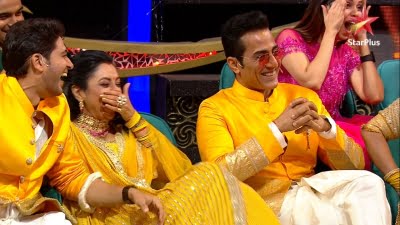 After running for more than three months, the celebrity reality show ‘Ravivaar with Star Parivaar’ ended with a grand finale on late Sunday. The show saw families of popular daily soaps competing with each other for the trophy, which was finally lifted by the longest running ‘Yeh Rishta Kya Kehalata Hai’ (YRKKH) family.

It was a neck-to-neck competition between the finalists including ‘Imlie’, ‘Anupamaa’ and ‘YRKKH’ soap families.

All of them had to guess the songs from the tunes being played. The first two songs were rightly identified by the ‘Imlie’ and ‘Anupamaa’ families, respectively, last two were guessed by the ‘Yeh Rishta Kya Kehalata Hai’ family and thus they emerged as the winners. Pranali Rathod, who plays Akshara in ‘YRKKH’, lifted the trophy and also picked up the cash prize of Rs 10 lakh.

Pranali also praised her ‘YRKKH’ co-star, Harshad Chopra, and said: “He is very special to me and a good friend of mine, who knows me very well and takes care of all my needs on the sets.”

Bharti Singh, donning the ‘Anupama’ look, and Harsh Limbachiyaa as ‘Vanraj’ left everyone laughing out loud with their hilarious acts. Rupali Ganguly, who plays Anupamaa in the show, came on stage and hugged Bharti.

Hosts Arjun Bijlani and Amaal Malik recalled some moments from the past episodes, such as Pranali’s romantic dance with Harshad or the way Neil Bhatt as Virat proposed to Sai, who’s played by Ayesha Singh.

Pravisht Mishra, seen as Yuvan in ‘Banni Chow Home Delivery’, said he had a lot of fun on the show and it won’t be easy for him to forget these moments. “It has been an amazing experience, and I hope it’s the same for our fans and viewers too,” he said.

The fun moments were spiced up by the performance of Imlie (played by Sumbul Touqeer Khan) and Anupamaa (Rupali Ganguly) in different avatars and showing some amazing dance moves. ‘Banni Chow Home Delivery’ lead actress Ulka Gupta also stunned everyone with her banjaran look.

The show premiered on June 12 and it wrapped on September 25 on Star Plus.