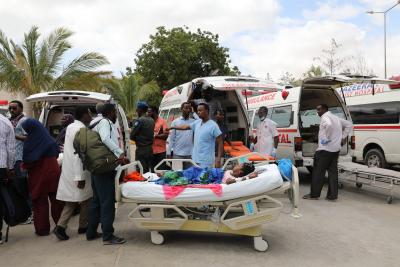 Mogadishu, Dec 8 (IANS) The WHO in collaboration with the UNICEF has said that 2.61 million children in Somalia have been vaccinated against measles and polio.

The UN agencies on Wednesday said that the nationwide integrated immunisation campaign which was rolled out in November amid severe drought targeted children under five years to save them from vaccine-preventable diseases like measles and polio, Xinhua news agency reported.

Mamunur Rahman Malik, WHO Representative for Somalia, said the UN health agency is employing all its available resources and innovative approaches such as integrated campaigns, solarisation of health facilities to maintain vaccine cold chain, and engaging local communities to save the lives of millions of Somali children who deserve bright and healthier lives.

According to the UN, a complex humanitarian crisis caused by conflicts, protracted drought, and emanating displacements of population in Somalia has put more than 3.6 million children under five years at risk as their immunities are running dangerously low and vulnerabilities are on the rise with every passing day.

It said the campaign also helped to vaccinate 2.31 million children aged between 6 to 59 months against measles, and administered Vitamin A and deworming tablets to about two million children under five years.

A total of 15,143 cases of measles, four cases of cVDPV2 in humans, among others, have been reported from January to October, according to the WHO.

Somalia is currently facing one of the most severe droughts in its history, with a looming famine and the possibility of severe loss of life due to hunger, malnutrition and disease.

At present, the UN said that 7.8 million people are affected and 1.1 million are displaced — on top of 2.5 million who were already displaced — as they are in search of food, water, shelter, healthcare, and any assistance available.