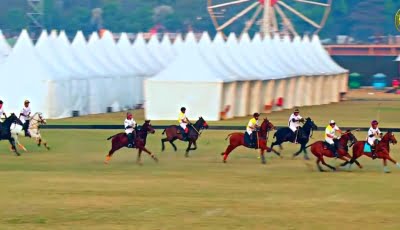 Mumbai, Jan 24 (IANS) The polo team from the Navy grabbed victory on the second day of the Amateur Rider’s Challenge Cup 2023, defeating MD Polo 5-4 at the Mahalaxmi Racecourse here on Tuesday.

In the first chukker, CPO Altaf Khan scored the opening goal of the game and put team Navy into the lead. In the second half of the chukker, Salim Azmi equalised for MD Polo. The scoreline at the end of the chukker, Navy and MD Polo were tied 1-1.

In the second chukker, Salim Azmi scored once again for MD Polo, both teams fought hard during the chukker but failed to create any significant chances as the score read 2-1 in favour of MD Polo at the end of the chukker.

In the third chukker, Shyam Mehta scored for team Navy and levelled the score. In the second half of the chukker, Capt AP Singh scored for the Navy and gave them the lead once again. The scoreline at the end of the chukker was 3-2 in favour of Team Navy.

In the fourth chukker, Rahul Dwarkadas scored two back-to-back goals for the MD Polo. In the second half of the chukker, Shyam Mehta scored again and levelled the scores. The scoreline at the end of chukker was Navy 4 v MD Polo 4.

In the fifth chukker, the winner was decided through the golden goal rule, Shyam Mehta scored another goal for his team and helped team Navy win 5-4.