Been talking with Boucher about making SA comeback: de Villiers 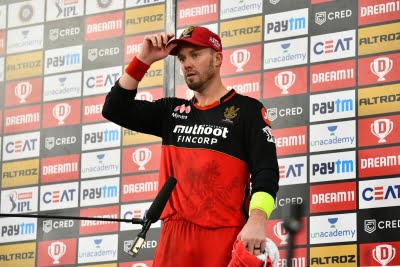 Mumbai, April 19 (IANS) AB de Villiers said that he and the South Africa head coach Mark Boucher will talk about the former captain coming out of retirement to play for the Proteas at this year’s T20 World Cup.

de Villiers has been in good form in the Indian Premier League (IPL) thus far despite having not played any cricket after the end of the 2020 edition of the tournament.

He scored off 27 balls to help RCB to victory against defending champions Mumbai Indians in the opening game before smashing an unbeaten 76 off 34 balls on Sunday against KKR. It helped RCB win the match by 38 runs.

“We are lined up to have a chat sometime during the IPL. But yes, we’ve been talking about it already,” de Villiers, who retired from international cricket in May 2018, said in the post-match press conference.

“Last year, he asked me if I would be interested. And I said, ‘absolutely’. And come the end of the IPL, we will have a look at where we are at with regards to my form and my fitness,” said the former South Africa captain.

de Villiers also said that how South Africa shape up in terms of their current players will also be a factor in whether he will return to the squad or not.

“Also, the situation with his team – he’s got to look at his guys who have been performing well over the last while. If there’s no space for me, so be it. If I can slot in there, it will be fantastic if all those things fall in place. Waiting for [the chat with] Bouchy towards the end of the IPL, and we will then plan accordingly,” said de Villiers.

The T20 World Cup is scheduled to be held during the months of October and November in India.