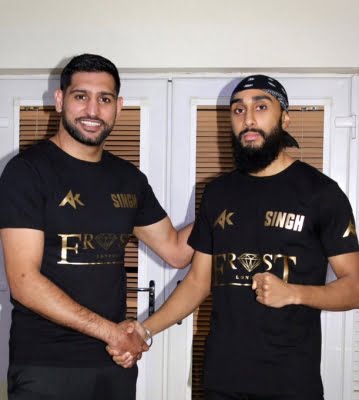 London, April 1 (IANS) Legendary British boxer Amir Khan knows a trick or two about how to groom talent, having become Britain’s youngest pugilist to win a silver medal at the 2004 Athens Olympics when he was only 17 years old. Now a promoter and a philanthropist, he is grooming a young Sikh boy to throw punches more powerful than him.

Khan has posted a picture of him standing with a young boxer and tweeted, “Excited to announce that I have signed an exclusive long term advisory/management deal with future boxing champion @tal_singh and will now be looking after Tal’s professional boxing career moving forward”.

The tagline on Tal’s Instagram reads, “Boxer with aspirations of becoming World Champion”.

Reportedly, Khan has taken it upon himself to not just manage 26-year-old Tal — an England amateur champion –but also look for promoters eager to launch his professional career this year.

This is Khan’s maiden foray into launching a boxer into the pro world, and by doing this he himself wants to make a career as a promoter.

Khan has been training Tal, a light-flyweight boxer, in his gym for nearly a year, and so excited is he about launching the pugilist that his Twitter and Instagram handles are full of pictures of the two sparring and posing in boxing gear.

“Delighted to announce that I have signed an exclusive long-term management deal with former unified 2x World Champion @amirkingkhan who will now be managing and guiding my career as a professional boxer. Looking forward to some big fights in the near future!” wrote Tal on Twitter.

Khan feels Tal has the punches and the speed to become the first Sikh world champion and his “unorthodox style” will only add to the enigma.

On why he has decided to gradually move away from a career in pro-boxing career, Khan was quoted as saying that with his reflexes slowing down he wants to get into the management side of it and pass on his experience to whoever wants to learn from him.