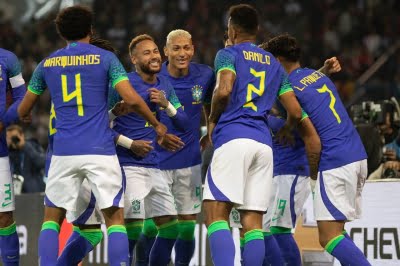 In Paris, Brazil took the lead in the 10th minute with a header from Barcelona forward Raphinha, assisted by Casemiro. Seven minutes later, Montassar Talbi’s header equalised for Tunisia.

However, Richarlison helped Brazil restore their lead in the 18th minute and Neymar extended the advantage with a penalty on the half-hour. Before the halftime break, Raphinha slotted home to register his second goal to make it 4-1, Xinhua reports. Brazil kept up their domination in the second half. In the 74th minute, Pedro sealed the win for the Selecao with a powerful volley.

Brazil, the world No. 1 side in the latest FIFA rankings, have been drawn in World Cup Group G with Serbia, Switzerland and Cameroon.

Against Jamaica, Argentina opened the scoring through Manchester City striker Julian Alvarez. In the second half, Lionel Messi came in from the bench and scored a brace. Argentina have been drawn in Group C with Mexico, Poland and Saudi Arabia.

Manchester City forward Julian Alvarez put the Albiceleste ahead in the 13th minute at Red Bull Arena in New Jersey when he tapped in from close range after Lautaro Martinez’s fine run and cut-back.

Argentina controlled possession but struggled for scoring opportunities against Jamaica’s well-organised defence. That changed following the introduction of Messi from the bench in the 56th minute. The two-time world champions immediately looked more threatening and Messi capitalised on poor defending to double their advantage with a long-range effort in the 86th minute.

The Paris Saint-Germain veteran made it 3-0 three minutes later with a low free-kick from the edge of the 18-yard box that caught goalkeeper Andre Blake off guard.

The South American outfit will have one more chance to test their squad before the World Cup when they meet the United Arab Emirates on November 16. Jamaica did not qualify for the tournament, to be played in Qatar from November 20 to December 18.

Twitter
Flip
Koo
Previous article
Jasprit Bumrah among Mark Waugh's Top-5 T20I players in the world
Next article
Kohli knows he is in that phase where he is enjoying his game big time: Sanjay Bangar
This May Also Interest You
Sports