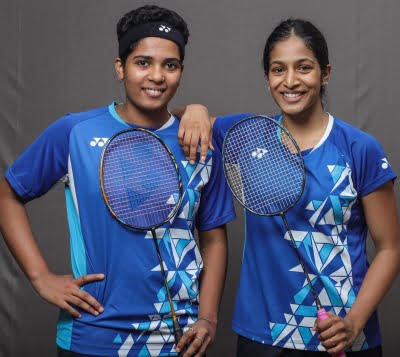 Treesa and Gayatri pair made its maiden entry in the Top 20 and is placed No.19 while Sen is the lone entry from the country in the top 10 in men’s singles.

Lakshya moved one spot to sixth place in the men’s singles rankings while Srikanth Kidambi and H.S Prannoy remained at the 11th and 12th spots.

Among the other Indians in men’s singles rankings, Sameer Verma, who participated in the Australian Open last week and withdrew in the second round, moved up two places to 34th; B Sai Praneeth was up one spot to 38th while Mithun Manjunath gained two spots and moved up to 41st position.

in women’s singles, P.V Sindhu, who withdrew from the BWF World Finals starting on December 7 as she is yet to recuperate from the injury suffered at the Commonwealth Games in Birmingham, stayed at the sixth spot while former World No.1 Saina Nehwal gained one spot to 32. Malavika Bansod held on to last week’s 35th position while Aakarshi Kashyap moved up two spots to 36th. Anupama Upadhyay was among the top gainers for India as she climbed three spots to 53.

There was no change in position for India’s top men’s doubles pairs with SAtwiksairaj Rankireddy and Chirag Shetty at 7th position; M.R Arjun-Dhruv Kapila is at 23rd while the combines of Krishna Prasad Garaga/Vishnuvarshan Goud Panjala and Ishan Bhatnagar/K. Sai Pratheek held their positions of 35 and 42, respectively.

The spotlight, however, was on the women’s doubles pair of Treesha Jolly and Gayatri Gopichand as they climbed up two spots to No.19 in the world rankings.

They made a major gain at the Hylo Open two weeks back when they reached the semifinals, picking up 4900 points while the 4320 points they collected at the Denmark Open was another big gain.

The seasoned combination of Ashwini Ponnappa and N Sikki Reddy was at 26 while Ashwini Bhat/Shikha Gautam was at 36.

Twitter
Flip
Koo
Previous article
As storm rages over 'The Kashmir Files', 'X' on his luggage upsets Vivek Agnihotri
Next article
YouTube removes 1.7 mn videos in India for violating its norms in Q3
This May Also Interest You
Health & Lifestyle