FIFA World Cup: Brazil were a bit more cautious in the second half against South Korea, says Gilberto Silva 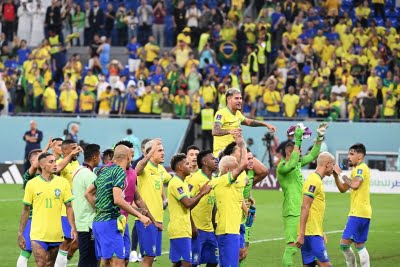 Mumbai, Dec 6 (IANS) The 4-1 verdict Brazil registered against South Korea in the Round of 16 match of the FIFA World Cup may look easy but former Brazil international and 2002 World Cup winner Gilberto Silva feels they were a bit more cautious in the second half of the match played in Stadium 974 in Doha, Qatar.

The win clinched Brazil a place in the quarterfinals, where they will face Croatia.

Viacom18 Sports expert Gilberto Silva was impressed with the intensity of Brazil from the word go.

“Brazil had a very good first half. The intensity in the game, after the first goal by Vini, gave them a nice pace, they created more opportunities and scored goals. Honestly, I was expecting them to have the same tempo in the second half, but they were a bit more cautious.

“At some point, they gave so much space at the back and South Korea created important situations where they could score goals. However, in the end, what matters is the result,” Silva was quoted as saying by Viacom18, which is broadcasting the event in India.

“They did not concede more goals which was important but they have to concentrate better in the next game because every game is a different situation,” said Silva, who was a member of Brazil’s World Cup winning squad in 2002, on VISA Match Centre.

A fabulous show of football by Brazil sent South Korea packing from the FIFA World Cup 2022 on Monday.

The Koreans were completely outplayed by the Brazilian side in the first half as the South Americans scored four goals in a span of 29 minutes. The Asian side could salvage its reputation in the second half, but just, with the help of a 76th-minute goal.