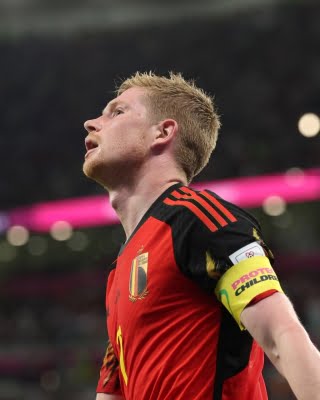 Doha (Qatar), Dec 1 (IANS) The 2018 runners-up Croatia survived some anxious moments in their Group F goalless draw against Belgium but made it to the Knockout stage of the 2022 FIFA World Cup.

At the Ahmad bin Ali Stadium in Al Rayyan, Croatia made it to the last 16 stage as group runners-up while the draw meant World No.2 side Belgium had to make an early exit from the football showpiece event.

Group F runners-up Croatia go through to play the winners in Group E in the last 16, while Morocco qualify for the knockout stage for the first time in 36 years, emerging as group winners. They will meet the runners-up of Group E, which contains Costa Rica, Germany, Japan and Spain, in the last 16.

The Atlas Lions started their Qatar campaign with a 0-0 draw against Croatia and added another feather in the cap by defeating Word No.2 Belgium 2-0 a few days ago. With Thursday’s win, their second in the group, they finished with seven points and topped the group.

Croatia finished second in the group with one win and two draws collecting five points and will face Group E winners, which are most likely to be Spain.

Among the teams which had already qualified for the World Cup on Wednesday were Australia, France, Portugal, Brazil, Senegal, The Netherlands, Argentina, Poland, USA and England.

The opening half produced next to nothing in the way of notable action — save for a penalty awarded to Croatia but overturned by the VAR, who detected Dejan Lovren stepping marginally offside prior to Yannick Carrasco’s foul on Andrej Kramaric.

Romelu Lukaku, who replaced Dries Mertens at half-time, came into the game with intent and immediately brought additional energy to the Belgium side.

But his missed opportunities in the second half proved costly, with each one bringing an audible collective groan from the stands and Inter Milan striker punched the dugout in frustration after the final whistle.

Croatia were unconvincing — they had a penalty ruled out by VAR due to an offside in the build-up in the first half — but did enough to secure progression.

However, they looked a level below what they showed to reach the final in Russia four years ago and their celebrations were fairly subdued after scraping through.

The golden Belgian generation led by Kevin De Bruyne and Romelu Lukaku probably missed the last chance of winning a World Cup after they failed to break the deadlock against Croatia despite several clear chances in the second half.