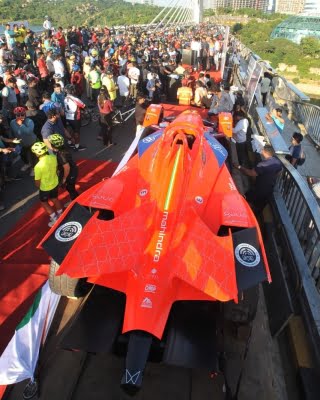 Hyderabad, Sep 25 (IANS) A Formula E car was unveiled in Hyderabad on Sunday as a prelude to the Formula E Prix race to be held in the city early next year.

Telangana’s Special Chief Secretary, Municipal Administration and Urban Development Arvind Kumar unveiled the Mahindra car at Durgam Cheruvu Cable-Stayed Bridge in the presence of sports enthusiasts. It was later kept on display at Tank Bund on the banks of Hussain Sagar lake in the heart of the city.

The car will be on display at several other locations in the city and also other metro cities in India in coming days in the run up to the Formula E race scheduled to be held in Hyderabad on February 11 next year.

This will be the first-ever Formula E race in India and the caris being showcased to create awareness around the country.

Hyderabad will be among the 12 cities of the globe and the only Indian city selected to host the Formula E Prix in 2023.

The 2.37 km track will pass by the Telangana Secretariat, NTR Gardens, and Lumbini Park along Hussain Sagar lake.

According to organisers, the Formula E Gen 2 cars are similar to the Formula 1 cars but run on electric vehicle technology. Powered by a 250kW battery, the car can reach a speed of 0 to 62 kmph in under three seconds and has the potential top speed of 280 kmph. The noise of the car racing at full speed reaches just 80 decibels.

These cars use hybrid tyres and are designed in a way that will last the entire race and in all weather conditions.

With 100 races completed since its inception in 2014, the Formula E Prix is among the fastest-growing sporting events in the world.

Twitter
Flip
Koo
Previous article
BCCI elections result to come out on October 18, the day of AGM: Report
Next article
Rahane asks Jaiswal to go off the field for indiscipline during 2022 Duleep Trophy final
This May Also Interest You
Sports