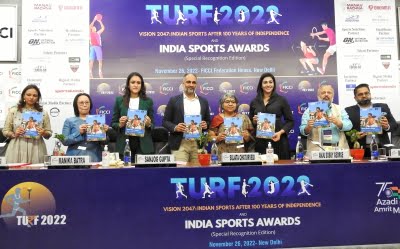 New Delhi, Nov 26 (IANS) With India participating and organising several sports events every year, the country has become part of a select group having their anti-doping law, Sujata Chaturvedi, Secretary of Sports, Ministry of Youth Affairs and Sports informed on Saturday.

Besides having a revamped anti-doping law, the government is also in the process of introducing proper testing facilities for the dietary supplements industry, an unregulated sector that is leading to athletes inadvertently taking prohibited substances.

“We are now heading towards a completely revamped national anti-doping programme housed in our National Anti-doping Agency,” she said.

In addition, she emphasised proper regulated testing facilities for the dietary supplements industry, which is primarily unregulated, leading to athletes inadvertently getting tested positive for prohibited substances.

She said, “We recently entered into an MOU with the National Forensic Science University, Ahmedabad and the Food Safety Standards Authority of India, for a lab to help with the dietary supplement testing.”

Addressing the TURF 2022 and India Sports Awards of FICCI, sports secretary Sujata Chaturvedi noted that 2022 has been very exciting for sports in India.

She listed several marquee games, starting with the Khelo India games in Bengaluru, followed by Khelo India Youth Games in Haryana, the first Chess Olympiad and the recent National Games organised this year.

“We are heading to more games and events as we go along in the next year”, she was quoted as saying in a release by the organisers.

Secretary Chaturvedi outlined numerous developments under the Khelo India scheme and said, “more than 2000 athletes are inducted into the talent development programme of Khelo India. They receive an out-of-pocket allowance and other support”.

She added 600 rural and small Khelo India centres have been opened across the country, where past champions get a chance to work with and nurture the young talent.

Further, 29 Centres of Excellence under the Khelo India scheme were set up in various states. The Sports Ministry collaborates with state governments to ensure that top-quality state athletes get trained and nurtured at those centres.

The Secretary informed the gathering that the ministry is coming up in a big way on starting Women’s Leagues. “We’ve had archery, football and various other sports coming into these leagues”, she said, adding, “I can assure you it’s going to be a huge deal in the coming years because we support inclusion in sports”.

“Women in sports defy the perception that they are weak or incapable”, she said. “In many countries, it has been seen that sport can be a force to amplify the human voice and tear down gender barriers and discrimination”.

In this regard, India’s top female table tennis player and Khel Ratna and Arjuna Awardee, Manika Batra, said, “sports has taught me to be brave, strong, and never give up in life”. In her message to upcoming and aspiring women athletes, she added, “just be fearless and do whatever you want to do”.

Neha Mathur Rastogi, Co-Chair, Sports & Youth Affairs Committee, FICCI and Founder, WordsWork Communications Consulting, spoke on the need for a meaningful dialogue on critical priorities by bringing everyone together. “There is a lot of power in working together and collaborating. Sports, as an industry, is a shining example of that”, she said.

The event witnessed the official launch of the UNESCO Knowledge Paper on the sports development landscape of India: “More than a Game”.

The paper aims to better understand India’s current sport for development landscape. Through exploratory research, the paper highlights how diverse sports-based organisations and initiatives are increasing social impact across the country. The report also outlines their contribution to the United Nations Sustainable Development Goals.

The eleventh edition of FICCI Turf was attended by 250 industry stakeholders, including policymakers, leading sportspersons and industry leaders.