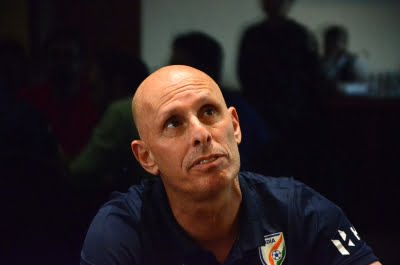 Goa, Jan 26 (IANS) East Bengal FC head coach Stephen Constantine said his team will be fighting for pride and are ready for another tough challenge as the Red and Gold Brigade take on FC Goa in Matchweek 17 of the Hero Indian Super League (ISL) 2022-23 season at the Jawaharlal Nehru Stadium, here on Thursday.

The Torchbearers are once again struggling at the bottom half of the table, collecting only 12 points from 14 games. In the reverse fixture, FC Goa won 2-1 at the Vivekananda Yuba Bharati Krirangan, courtesy of a late goal from Edu Bedia. Stephen Constantine’s men are coming on the back of three successive defeats and would like to turn the tide against FC Goa, in order to finish the season with some pride.

Constantine shed light on the team’s preparations and how things have changed from their previous encounter against FC Goa.

“Our previous game against FC Goa was only the second game of the season. Now after 14 games, the scenario is completely different. Teams have evolved. They (FC Goa) have changed a lot. They are fighting for the play-offs while we are fighting for our pride. I think this is going to be another difficult game for us. But we didn’t come here to lose,” the head coach was quoted as saying by indiansuperleague.com.

The Englishman believes that his side hasn’t performed well this season but asserts they will do much better next season.

“I have been assessing the squad since the day I came here. Next season, we will be in a much better position than this season. We have already identified our targets; we have one guy waiting to play us. So we will be a completely different team next season and that only comes with continuity and consistency,” Constantine said.

Once again the transfer ban is troubling East Bengal FC as they aren’t yet allowed to register any player until the ban is lifted.

“I can’t tell you in words how frustrating it is. We were looking for new players in the January window. We targeted three to four players but with only one week remaining in the window, there is a new barrier that is obstructing us from signing players. Hopefully, people will understand that everything is not up to me, I can’t lift the ban!” added Constantine.

Cleiton Silva has been a huge asset for the Red and Gold Brigade this season. The Brazilian forward has already netted nine goals in 14 appearances. But it seems that East Bengal are depending too much on one player. On being questioned whether the team is dependent on Silva, Constantine affirmed that the team’s over dependency on the striker.

“He (Cleiton) gets paid for scoring goals. Have you been dependent more on him? Yes. That’s why we tried to sign somebody to help him. He (Cleiton) is completely professional on and off the pitch. Yeah, we know we are too dependent on him. But I think everybody in the ISL knows that,” Constantine stated.

East Bengal roped in Ivan González from FC Goa ahead of this season to strengthen their defense but his performance hasn’t really helped them. It looks as if the Spaniard is not ideal for Constantine’s style of football.

“I didn’t sign him (Ivan González). He was already there in the squad. I didn’t even sign any players. But what I could say (about Ivan) is FC Goa were a settled team. For the last two seasons, there wasn’t any fan pressure as well. Coming to East Bengal for Ivan has been difficult in terms of fans and expectations,” explained the coach.