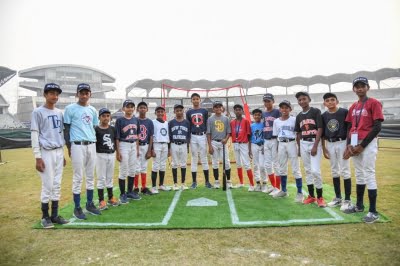 Noida, Dec 2 (IANS) Darsh Belsare of the Indore Padres hit 8 home runs to beat Shobit Pani of the Bangalore Rays to emerge victorious of the Home Run Derby on the first day of the finals of MLB Cup 2022 at the Noida Cricket Stadium, here on Friday.

Darsh was presented with an official MLB match-size slugger by Rick Dell, General Manager of Baseball Development, for his win.

One player was selected from each team to participate in the Home Run Derby. The 16 teams that had made the trip to Delhi-NCR to take part in the final were divided into two pools, National League and American League.

The hitter with the highest total number of home runs from each pool advanced to the final round of the competition. Each hitter was given 45 seconds to hit as many home runs as possible.

The ball was tossed up to the hitters by an MLB India On Track Coach Saurabh Sharma standing behind a protective screen from 15 feet away.

The finals of MLB Cup 2022 will conclude on December 4, capping an overall successful tournament.