My level will go up a couple of notches I get fitter: Praneeth 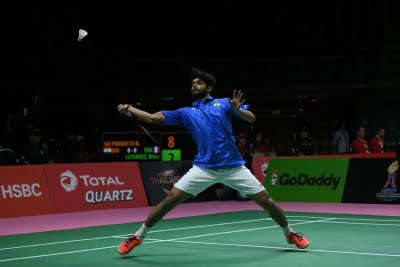 New Delhi, April 22 (IANS) Ace Indian badminton player Sai Praneeth said that he is looking to get fitter so as to improve the level of his game.

Praneeth feels that improving his fitness is what is required for him to bridge the gap between himself and some of the top players in the game as he is not lagging too far behind in the technical aspects.

“I don’t have many problems with my game but I must get fitter. The level of badminton will go up a couple of notches if I get more fit and remain fit consistently,” Praneeth told the Olympic Channel.

Praneeth, who won bronze in the 2019 World Championships, faced Danish world No.2 Viktor Axelsen in the second round of the All England Open earlier in the year and seemed to be on the ascendancy for much of the first half of the match. He won the first game 21-15 and was leading 5-0 in the second when he seemed to slack off and went on to lose the match.

“It was a bit of a fitness issue for me in All England. If everything had gone smoothly and I was in a better shape I could have played much better,” said Praneeth.

The 28-year-old Hyderabad player said that he lost almost three weeks in January due to testing positive before the Toyota Thailand Open.

“I just wasted three weeks of my time without any fault of mine. Mentally it is also very taxing. In every tournament, you have to get Covid tested multiple times. The results are sometimes inaccurate,” said Praneeth.