Nagal one step away from Barcelona Open main draw 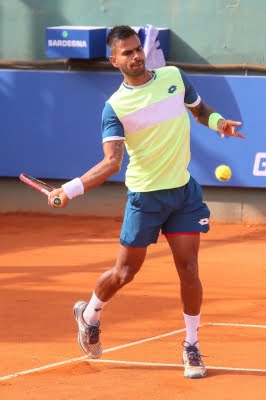 Barcelona, April 18 (IANS) India’s top-ranked men’s tennis player Sumit Nagal overcame a tough challenge from Ukraine’s Illya Marchenko 3-6, 6-2, 7-5 in the ATP 500 Barcelona Open qualifier to be one step away from the main draw of the tournament.

The 136th-ranked Nagal, who is aiming to get into the top-100 on the ATP rankings, will now take on Italy’s Thomas Fabbiano for a place in the main draw of the tournament, which is one of the most important events in Spanish tennis.

Spaniard Rafael Nadal, the joint Grand Slam record holder with Roger Federer with 20 titles each, has won 11 trophies at the Barcelona Open.

Despite being ranked higher than his opponent on the ATP, Nagal (136th) cannot take Fabbiano (171st) lightly as the 31-year-old Italian had a singles ranking of 70 in 2017 and twice reached the Wimbledon third round, in 2018 and 19.

For more than a month now, Nagal has been playing in Europe but has met with little success. The Indian had to bite the dust in the opening qualifying round of the Rolex Monte Carlo Masters, going down to Italy’s Stefano Travaglia recently.

Nagal also lost in the opening round of the ATP 250 Sardegna Open in Cagliari, Italy to fellow Slovakian qualifier Jozef Kovalik earlier this month after winning two rounds of qualifiers.