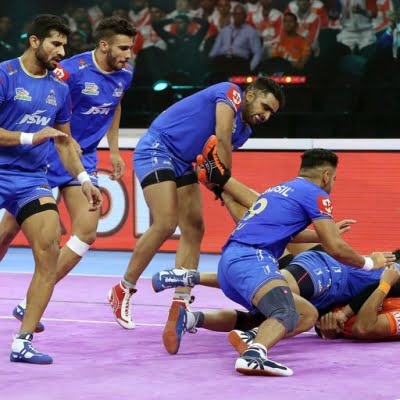 Hyderabad, Nov 29 (IANS) Manjeet Singh came up with a superb performance as Haryana Steelers picked up a thrilling 35-33 win over U Mumba in the Pro Kabaddi League (PKL) Season 9 match at the Gacchibowli Indoor Stadium, here on Tuesday.

In the low-scoring encounter, defender Mohit was the top performer for Steelers, earning 7 tackle points. But it was Manjeet who shifted the tide in his team’s favour with a late super raid, as Steelers picked up their second win in a row. Manjeet and Mohit both scored 7 points each for the Haryana Steelers.

The match started with Meetu earning a sensational four-point Super Raid for Haryana Steelers to give his side an early lead. Guman earned a point back for U Mumba with a successful raid, and then Mumbai’s defense caught hold of Meetu to level the scoreline at 6-6. Steelers earned a slender one-point lead as Mohit took out Ashish with a strong tackle.

Mohit’s good form in defense continued in the first half, as he maintained a 100 percent strike rate on tackles to keep Haryana in the lead. Mumbai’s Mohit made a defensive error as he stepped out of bounds to give away an easy point to the Steelers. But he made up for his mistake by catching Meetu with an ankle hold in the dying seconds of the first half and U Mumba entered halftime with a 13-12 lead.

With 10 minutes left in the match, Manjeet managed to get a running hand touch on Guman to get a point back for Haryana. He turned the match on its head once again with a two-point Super Raid after which Steelers inflicted an All-Out on U Mumba to take a 31-28 lead.

With Mohit and Jaideep getting tackle points late in the match, Haryana Steelers managed to get a thrilling 35-33 comeback win.