Truth can be troubled but not defeated: Vinesh shares cryptic post amid wrestles feud with WFI 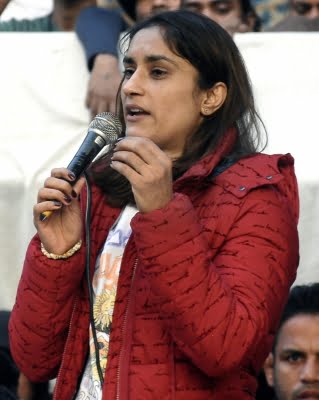 “Truth can be troubled but not defeated,” Tweeted Vinesh, who alleged that Brij Bhushan Sharan had been harassing female wrestlers.

“If the destination is big, keep your spirits high,” she said in another tweet.

Vinesh’s tweet came a day after the reports claiming that a plea was moved in the Delhi High Court against multiple wrestlers, including Sakshi Malik, Vinesh Phogat and Bajrang Punia by WFI chief.

Sharan Singh, however, in a tweet clarified that “No petition has been submitted by me or any authorised person associated with me against the Delhi government, the protesting wrestlers and the news channels. I have not authorized or authorized any advocate, law agency or representative to present the petition in any court of law.”

Noted wrestlers Bajrang Punia, Vinesh Phogat, Sakshi Malik and a number of other grapplers on January 18 staged a protest against the Wrestling Federation of the India (WFI). The protesting wrestlers have also accused the WFI of arbitrariness, mismanagement, misgovernance and bias in selection as harassment of wrestlers by its coaches and president.

The aggrieved grapplers called off their protest after a long meeting with Sports Minister Anurag Thakur on Friday night and getting assurances from the government that their grievances would be addressed.

The ministry has suspended all the ongoing activities of the federation and appointed an Oversight Committee to take over the day-to-day functioning.

The committee will probe the allegations of sexual harassment and corruption against the WFI chief Sharan Singh. The WFI chief will also step aside until the probe is completed.

Twitter
Flip
Koo
Previous article
Harmanpreet named captain of the ICC Women's ODI Team of the Year
Next article
SA20: We just need to stay calm and do the basics right, says Rashid Khan after loss to Pretoria Capitals
This May Also Interest You
News