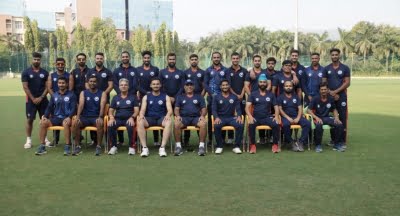 Ahmedabad, Nov 26 (IANS) Jammu & Kashmir on Saturday entered the quarterfinals of the Vijay Hazare Trophy for the very first time with a seven-wicket victory over Kerala in their pre-quarterfinal match at the Gujarat College Cricket Ground ‘A’.

Pace all-rounder Auqib Nabi picked career-best figures of 4-39 in his ten overs to set the base for a famous victory for Jammu & Kashmir. Electing to bowl first, Nabi delivered the first breakthrough for Jammu & Kashmir by breaking the 47-run opening stand of Kerala. He first dismissed opener Rahul P and took out Vatshal in quick succession.

Vinoop Manoharan hung around to hit a half-century for Kerala. But he didn’t get any support from the other end as captain Sachin Baby was bowled by Sahil Lotra while Mujtaba Yousuf (1-37) removed wicketkeeper Vishnu Vinod.

Sijomon Joseph joined hands with Manoharan to stabilise Kerala’s innings with a 35-run partnership off 63 balls. But Jammu & Kashmir hit back as Manoharan was dismissed for 62 off 81 balls by Yudhvir Singh (2-16) while Abdul Bazith P.A. was trapped lbw on the very first ball by Vivrant Sharma.

Joseph made 32 before being bowled by Nabi and from there, the rest of the batters fell in a heap to be bowled out for 174 in 47.4 overs. In reply, Qamran Iqbal and Shubham Khajuria shared a brilliant 113-run opening stand which came in 131 balls.

Khajuria brought up his fourth fifty of the tournament before a mix-up saw him run out for 61-ball 76, laced with five fours and six sixes. There were some nervous moments when Vivrant and captain Shubham Singh Pundir fell in quick succession and Iqbal retired hurt on 51.

But Henan Nazir and Fazil Rashid ensured the target was chased down successfully in 37.5 overs with an unbeaten 25-run partnership to help Jammu & Kashmir enter the quarterfinals of the tournament for the first time. They will now meet Group B table-toppers Assam in the third quarter-final of the tournament on November 28.

Jammu & Kashmir have been on an impressive run in the Vijay Hazare Trophy this year, coming second in Group D of the competition. They began their campaign with a two-wicket upset victory over reigning Ranji Trophy champions Madhya Pradesh with a successful chase of 343.

They also defeated Baroda by 94 runs, Nagaland by 99 runs, Odisha by three wickets and Nagaland by nine wickets. Their only defeat came against their group toppers Punjab, by eight wickets.