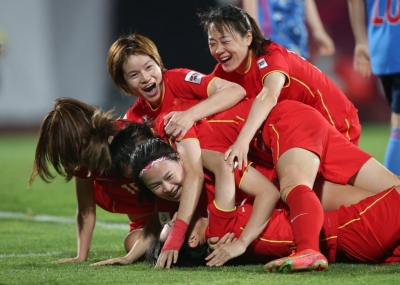 Mumbai, Feb 5 (IANS) China have won the Women’s Asian Cup eight times and will be playing against South Korea on Sunday to extend their record. But skipper Wang Shanshan said her team can’t be complacent as Sunday’s summit clash will be challenging.

China are undefeated in their previous seven meetings against Korea but Wang, who is determined to help her team bag the title for the ninth time, said they will not take for granted the final at the D.Y Patil Stadium.

“I think tomorrow’s final will be very challenging for both teams and we have to emphasise not only on attacking but on our defensive strategy as well,” said Wang, who is optimistic about her side’s chances.

“On winning our ninth title, it is important for teams to set goals but we are just focusing on our preparations and winning tomorrow’s match. As captain, my role is to lead the team. It’s like being a role model — setting an example and encouraging the team in match situations,” the Chinese captain was quoted as saying on the official website of the AFC.

Wang and forward Wang Shuang have been China’s star performers with five goals each — with the skipper having scored in each of the team’s matches so far.

In the semi-final against Japan, Wang Shanshan’s 119th-minute effort forced the game into penalties with the captain then scoring the decisive spot-kick to take China PR into their first AFC Women’s Asian Cup final in 14 years.

The Golden Boot is within reach as Australia’s Sam Kerr is just two ahead but Wang said she is not focused on individual honours.

“Getting the top scorer award is secondary for me. I don’t feel the pressure. We have reached the final with a clear goal in mind, which is to win the title. We should stay calm and like the head coach has mentioned, enjoy football. That’s good enough for me.”