Terrifically eerie & terribly scary, John Krasinski A QUIET PLACE is a cult in the horror/monster genre that guarantees scares to even the haters of this genre. 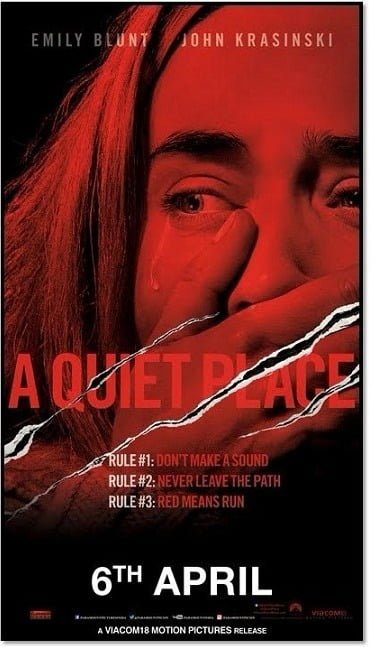 Terrifically eerie & terribly scary, John Krasinski A QUIET PLACE is a cult in the horror/monster genre that guarantees scares to even the haters of this genre.

This constant spine chilling pulse riser arguably delivers the most eerie scares in recent times twining the metaphoric elements of evil/beast ( the outside world/alien) with the kind hearted melodrama of good parenting while it revisits the classic era in its stunning clam and silence by this ‘silent’ goofy horror that scares your pants off like never before.

Like the year’s Oscar winner THE SHAPE OF WATER – the modern day masterpiece by Guillermo del Toro that underlined the difference between a student and a master in bold, American film and television star John Krasinski
( The Office series) in his third outing as a helmer (The HOLLARS, BRIEF INTERVIEWS WITH HIDEOUS MEN) does something similar.

John Krasinski masterly crafts a near silent horror-thriller cult in this unique story of survival that has an astonishingly terrifying premise which is developed keeping in mind all the traits of a smashing crowd pleaser. John Krasinski plays with the genre with a gimmicky of restricting the ‘sound’ of the characters to just some whispers resulting in a continues episodes of terror that are bang on and as the film progresses and the deadly, blind and mysterious creatures that hunt by sound threaten the survival of a family of four – a pregnant wife, husband and two kids, the movie amazingly goes beyond and starts haunting you as you leave the theatre and by the time you have reached home, A QUIET PLACE has made it place not only in the hearts of the devotees of horror but others as well.

Writer director John Krasinski along with his co –writers Bryan Woods, Scott Beck waste not a single frame and are bang on target right from the word go. It’s 89th day of a mysterious invasion, John Krasinski plays the father, Emily Blunt (John Krasinski real life wife) plays the mother. Noah Jupe, the WONDERSTRUCK fame Millicent Simmonds and Cade Woodward play their three children. Things are still normal in this post-apocalyptic world at first glance, till we see the family walking barefoot and communicating in sign language. A pretty sight in upstate New York has been destroyed. The family is at a grocery store. Suddenly the younger son (Cade Woodward) makes the mistake of playing with a battery-powered airplane toy. It’s taken away from him but the child regains it and when the family is on its way back, crossing a bridge, the toy starts to make noise. A tall and thin alien with eerie features appears from nowhere like a flash and that’s it.

The real problem begins a year later, the family is trying to come to terms with the loss of the younger son and the mother is now around 3 – 4 months pregnant. The family is living a life amidst fear and whispers. The father continues to peek into newspaper articles and his research on the mysterious creatures that kill at the slightest sound in a hidden basement of his house.

John Krasinski very smartly and brilliantly makes us enter into his world which is surreally operated by two buttons – fear and silence. The atmosphere created is so capturing and engulfing that you don,t know which button will be pressed at what time. This is the hallmark of a great horror film that has an uncanny aura of a creature/ alien/monster movies that strikingly ‘sounds’ perfect.

Yes, for entering the world of John Krasinski in A QUIET PLACE you will have to be ‘quite’/mum and not raise a voice for the following questions that may pop up like who are these creatures/ their origin, why they are blind and kill when they hear a sound and why they get scared when the sound gets louder for them. The creatures/aliens are attacking sounds made by humans only?. What about sounds of the nature – rain/wind/storms?.

Yes, the argument that the idea of the world we are living in today is ‘sound’ for creating the metaphor where people are scared to raise a voice and speak your heart out and the one who shouts the loudest survives needs to accepted. Having said that, it must be mentioned that John Krasinski in A QUIET PLACE overcomes the above queries with its incredibly innovative eerie feelings making the audience sit on a time bomb that can explode with thrills and scares at any moment. The movie does makes you wish those creatures come real especially when you are in an auditorium enjoying the proceedings and some stranger sitting next to you is continuously talking on phone or during those noisy traffics on road.

Technically brilliant, music by Marco Beltrami adds to the adrenaline rush, cinematography by Charlotte Bruus Christensen sets the mood, editing by Christopher Tellefsen is crisp. Performances are completely natural by all but it’s the WONDERSTRUCK fame Millicent Simmonds that steals the show.

A QUIET PLACE is an incredible piece of horror by John Krasinski, this near silent spine chiller not only satisfies the hunger of the genre crazy souls but goes beyond in creating its own voice without making much noise and provides the most eerie feelings on screen in recent times.