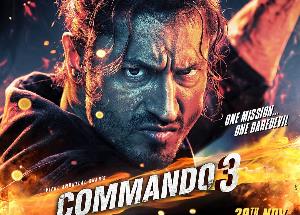 COMMANDO 3 movie review is here. The action-thriller stars Vidyut Jamwal along with Adah Sharma and Gulshan Devaiah while Angira Dhar makes her feature movie debut. COMMANDO 3 – the sequel to the 2017 COMMANDO 2: THE BLACK MONEY TRAIL is directed by Aditya Datt. Does COMMANDO 3 fulfills the expectations and comes triumph in this mission?, Let’s find out in the movie review of COMMANDO 3. COMMANDO 3 releases in India on November 29, 2019.

Immediate reaction when the end credits roll
Beyond any iota of doubt, Vidyut Jamwal is the best action hero we have in this part of the world, COMMANDO 3 underlines this cemented fact with a silver lining and prints it in golden bold.

The Story of COMMANDO 3
While COMMANDO (2013) was about the rough and tough dare devil Karanvir Singh Dogra fighting for the safety of a woman, its sequel which surprisingly took 4 years COMMANDO 2: THE BLACK MONEY TRAIL (2017) focused on bringing the black money back to India, its third installment in 2019 COMMANDO 3 focuses on bhai chara and ekta – the Hindu Muslim unity which forces dreaded international terrorist like Buraq taste his own medicine.

So, Commando Karanvir Singh Dogra (Vidyut Jammwal) is on a mission once again, this time he has to find masked mastermind Buraq and Gulshan Devaiah) who has brainwashed many Indians and is planning a major terror attack on the auspicious occasion of Dussehra in India. Inspector Bhavana Reddy (Adah Sharma) from India and British Intelligence agent Mallika Sood (Angira Dhar) and her colleague Armaan (Sumeet Thakur) join Karanvir and a team is formed. Soon a deadly game of one-upmanship begins where duty, pride, nation and relationship are at stake. Who wins and who loses finds the crux of this movie.

Good points
A crowd-pleasing action thriller right from the word go, COMMANDO 3 has enough for the adrenaline junkie to be happy. Death and gravity-defying stunts from Vidyut Jammwal who is a class apart, a man he is so terrific. This lethal combo of Lee, Damne and Chan is all in one – Vidyut Jammwal is electrifying and at some places, the target audience will jump with joy and start blowing whistles in joy for the sheer power and intensity. A couple of action pieces are so good that watching it for just once won’t be enough if you are born and fed with high octane martial arts/combat action of Jean-Claude Van Damme, Jackie Chan, the great Bruce Lee, Jet Lee, etc. Seeti Maar action.

Vidyut Jammwal teams with one of the finest action choreographers – Andy Long and the result is a treat for action buffs. The Parkour moves to complex martial art combos, knife fights, the action choreography in COMMANDO 3 has been taken to a new level. With Vidyut Jammwal doing his own stunts and the action taking place directly at the location and very less us of special effects, the action in COMMANDO 3 is so real it’s like watching it live.

Aditya Datt (TABLE NO. 21, WILL YOU MARRY ME?, GOOD LUCK!, DIL DIYA HAI, AASHIQ BANAYA AAPNE) tries to add a human angle to the thriller and succeeds to some extent. In the thriller zone, the director shows his flair of competency and succeeds in establishing a proper build-up that adds to the adrenaline rush.

The ladies too pack a punch. Adah Sharma has the looks and the moves and she is kick-ass in her action sequences. Web fame Angira Dhar in her feature movie debut gets some task at her disposal and she performs some deadly stunts as well.

Sumeet Thakur as Armaan has his moments.

Flaws
The straight on the face chest-beating jingoism, the juvenile execution of the climax, the contrived screenplay where people meet and things happen primarily to take forward the next intense moment/stunt. No back story for the antagonist, the ‘real’ action in COMMANDO 3 gets artificial, to the face script that dilutes the exceptional qualities of Vidyut and Gulshan.

Final words
COMMANDO 3 has seeti maar action but the straight on the face chest-beating jingoism may turn parda faad for the ears for audience who search for more sense, sensibility and authenticity. Though a crowd-pleasing action thriller with Vidyut Jammwal kicking regularly so that the target audience gets the worth of every penny and Gulshan Devaiah having a blast as the mad band man.

The awesome power of Jammwal as an action hero and the brilliance of Devaiah as an actor deserve something much better and refined. Still going with 3 an extra for Vidyut Jamwal and Gulshan Devaiah.