SIMMBA Movie Review : Ranveer Singh excels in the entertainer of the year 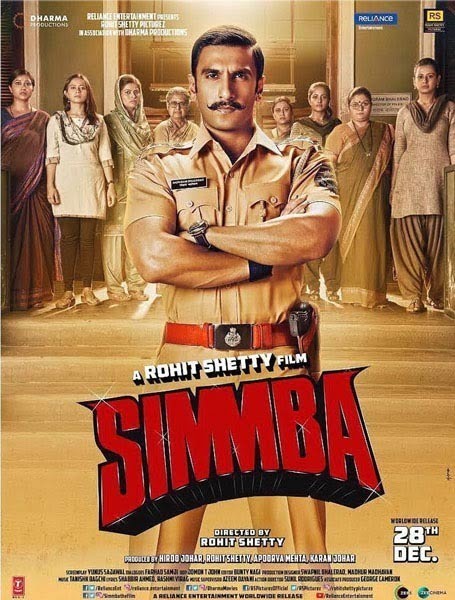 SIMMBA Movie Review : Ranveer Singh excels in the entertainer of the year

SIMMBA movie review is out. The much awaited bollywood masala starring Ranveer Singh helmed by Rohit Shetty also has Sonu Sood, Ashutosh Rana and Siddhartha Jadhav. Sara Ali Khan plays Ranveer Singh’s love interest in the third installment of the popular SINGHAM franchise that starred Ajay Devgn. Is SIMMBA the mass entertainer as expected?, find out in the review of SIMMBA below…

Major Highlights
After Salman Khan as Chulbul Pandey, Ajay Devgn as Bajirao Singham, Bollywood has another massy crowd pleasing cop in Ranveer Singh as SIMMBA. Rohit Shetty makes ways for SIMMBA into the hearts and minds of the audience in the way he knows and is at his best – a true blue, pounding, action packed, massy masala roar, SIMMBA is the entertainment, the escapism without the opium which we needed the most.

Clap worthy, seeti bajao moments?
Plenty right from the beginning till the end.

Most Important?
Don’t leave the beginning and we are sure at the end you will be elated with an overwhelming surprise.

What is SIMMBA? sequel, prequel or a spinoff of SINGHAM?
SIMMBA is a franchise that takes the core element of Ajay Devgn starrer SINGHAM – to develop its protagonist Sangram Bhalerao aka ‘Simmba’ played by Ranveer Singh.

The most striking and major lesson to learn from Rohit Shetty in SIMMBA?
A Bollywood masala entertainer, designed to please masses and earn money revolves around a corrupt cop, a local goonda, drugs, Goa is the setting, it has a message against the culprits of the heinous crime – rape and still no item number, no foul language, action striking but not at all gory, hardly any blood. You don’t always need to be spreading blood, utter gallis, and show skin to attract the attention of the masses. Rohit Shetty easily manages to skip item numbers, blood gore, galli galore which could have been easily used without any fear or danger and he makes it suitable for a family outing. This needs an expertise, its not just pasting pleasing buffoonery.

The Plot
An orphan Sangram ‘Simmba’ Bhalerao (Ranveer Singh) born in Shivgadh – the home town of Bajirao Singham (Ajay Devgn). Contrary to the honest and iconic Bajirao Singham, Simmba desires to use the power of the police force to earn money and acquire all the riches. The corrupt, manipulative and pleasingly kamina Simmba gets transferred to Goa (Miramaar) and he starts wagging his tail for the local gangster Durva Ranade (Sonu Sood). Things are going good for the evil nexus between crime and law but one day, a devastating incident sees a paradigm transformation, a massive change of heart from the greedy, cunning, manipulative and ‘kamina’ SIMMBA to a man of right virtues who develops the courage to stand against the powerful Durva and sends a threatening message to the culprits of the world’s most heinous crime – rape.

Comparison between SIMMBA, SINGHAM, SINGHAM RETURNS?
SINGHAM was the beginning of the franchise, the first prayer from the devotee of cinema from yore – Rohit Shetty who paid tribute to righteous, rebellious and fearless cop idolized by the icon for the icons – Amitabh Bachchan in ZANJEER as Inspector Vijay, SINGHAM RETURNS was an extension while SIMMBA is the amalgamation of the all the popular and populist elements seen in Bollywood masala genre twined with a quirky, funny, corrupt cop that winks at a relevant and important issue concerning the women in our society.

Writing/dialogues
Yunus Sajawal and Sajid Samji have written an entertainer right from the word go… it’s a well written crowd pleaser that puts entertainment before logic and it’s not an easy job to get the buffoonery right at most of the times. Dialogues are the major highlight.

How is Ranveer Singh as SIMMBA?
Ranveer Singh is an actor par excellence, the energy, exuberance and the terrific capacity to get into the ease of a character is mind blowing indeed. He can play Khilji in PADMAAVAT and send shivers down your spine and as SIMMBA he can make you smile, laugh, dance and roar together in perhaps his best mass appealing act till date. The Marathi accent and dialect which he mastered in BAJIRAO MASTANI, comes to good use in his portrayal as a corrupt Marathi cop from Shivgadh Maharashtra. Ranveer Singh from an actor turns into an entertainer and that’s not a mean achievement to change your shades like a chameleon on screen at a snap and that too with utter conviction. Paisa vassol act, (value for money).

Sonu Sood
Sonu Sood has played villain in DABANGG, R… RAJKUMAR and it must be said that in SIMMBA, Sonu Sood gives his most controlled, restrained and composed performance as the cunning and wicked Durva Ranade.

Performances by other supporting actors in SIMMBA

Sara Ali Khan
Ironically, the talented Sara Ali Khan is wasted and reduced to a dabba wali in this escapist adage on women empowerment.

Does Ajay Devgn – the original SINGHAM have an appearance?
This is not a spoiler. Believe me!!, when Ajay Devgn aka Bajirao Singham appears on screen, it’s the moment of tremendous joy and testimony that no matter what, the action masala entertainers, the cinema of yore is the entertainment to the core at any era, time. Provided it’s done with the passion and conviction the way Rohit Shetty does today, as his gurus – ManMohan Desai, Prakash Mehra, Yash Chopra, etc. had done before. The cinema screens especially in single screens are bound to erupt when Ajay Devgn makes his entry. Clap, clap.

How has Rohit Shetty directed SIMMBA?
Rohit Shetty is the rare breed of director who can read the pulse of the money paying audience. He knows his cinema and is proud to be the follower of the 70’s, 80’s action, comedy, masala yore. The influence is evident and the way he does it needs mastery. Whatever be the reaction of naysayers, no matter how escapist, over the top, loud it seems but the important message – supporting capital punishment for rapist gets delivered to the masses.

How true are the reports of SIMMBA having similarities with NTR’s TEMPER?
Yes, certain elements are inspired and some action scenes are inspired/borrowed, but SIMMBA establishes its identity in due course.

Action
The action is not brutal and unpleasant, its massy and clap worthy.

Music
‘Aankh Marey’ sung by Mika Singh, Neha Kakkar, Kumar Sanu recreated by Tanishk Bagchi is already a winner. ‘Aala Re Aala’ by Tanishk Bagchi sung by Dev Negi, and Goldie has turned out to be quite peppy on screen.

Flipside
You know it already but still – SIMMBA is primarily designed for the lovers of massy masala entertainers, the prime reason for the audience to visit theatres. Naysayers as said earlier will complain of having the same cliché commercial masala massy entertainer to deliver an easy going, escapist, solution to the culprits of the most heinous crime. Scripting the movie at convenience and will, bringing things, elements, turns right on the face. Sheer buffoonery, lack of realism and more…

Is SIMMBA worth watching?
Keeping its loyalties intact to ‘Rohit Shetty’, ‘SINGHAM’ brand of entertainment inspired from cinemas of yore, SINGHAM proved that the combo of Ajay Devgn and Rohit Shetty is another spelling of success. SIMMBA adds another adjective to it, the combo of Ranveer Singh and Rohit Shetty is also equally lethal from now on. With Ajay Devgn coming in with his deadly brawn, SIMMBA gains the winning sharp edge and hits the bull’s eye. Delivering exactly what the entertainment hungry souls of Bollywood wants. Rohit Shetty has left no stone unturned to keep its target audience satisfied. SIMMBA is entertainment at last, by large. Roar (go) for it.