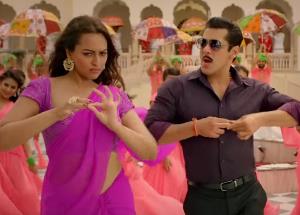 The makers of Dabangg 3 are surely taking the entertainment and fun quotient really high with the firecracker of a song that released today, ‘Yu Karke’. The video that came out today is sure to be a treat to all the fans with the out and about chemistry and naughty avatar of Chulbul and his ‘sexy’ Rajjo Pandey.

The fact that the song has vocals by Chulbul Pandey himself just adds to the fun.

Bringing us Salman Khan and Sonakshi 's dance moves with the perfect dose of Chulbul and Rajjo to make our day, the song is a treat to sore eyes.

A visually colorful and vibrant number, the video teaser itself that was released yesterday prepared us for a Friday bonanza from the most daring, badass and lovely cop, Chulbul today!

Well, with the video of ‘Yu Karke’ out now, we surely are grooving to the interesting hook step of Chulbul Pandey where Vaibhavi Merchant has definitely given us another rocking, ‘bindass’ and fun number with Dabangg 3. You have heard the song and here’s the video now!

The jukebox of the film came out earlier but the video is something that will leave you with the taste of Chulbul and Rajjo’s naughty and crackling chemistry! The vibes of the song are quite fun, and kissing hook steps is something unique and is sure to create a lot of buzzes.

The much-awaited Dabangg 3 is directed by Prabhudeva and produced by Salma Khan, Arbaaz Khan and Nikhil Dwivedi under the banner of Salman Khan Films and is slated to release on 20th December, this year.