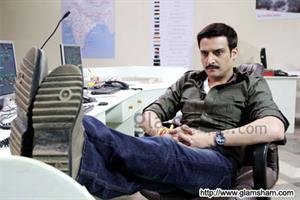 RAJDHANI EXPRESS is about a train from Delhi to Mumbai which sees an issue crop up amidst passengers who belong to different walks of life, what with a designer, writer, an item girl and a common man coming face to face with each other. However, when the situation gets more and more intense, intervention of a cop played by Jimmy Shergill is sought. If early indications about his characterisation in the film is any indication, he is portraying someone with grey shades to him.

'Well yes, there are different point of views that these passengers are carrying which leads to a heated argument. Then on the other side there is top brass and the politicians who need to take a call on the situation. Somebody has to take charge and this is where my character comes into picture. As a hardcore cop, he needs to get job done by hook and crook. Even if it involves bending rules, he goes ahead and does that. As a hardcore character, if he is tagged as someone with grey shades so be it,'' smiles Jimmy.

Guess with this swift move of his, he also graduated to play a similar character that Anupam Kher had played in A WEDNESDAY where he took charge over a terrorist attack situation while being placed in a control room.

Also starring Priyanshu Chatterjee, Sudhanshu Pandey, Puja Bose and Sayali Bhagat in principal roles along with Gulshan Grover, RAJDHANI EXPRESS is directed by debutant Ashok Kohli and releases all over this Friday.