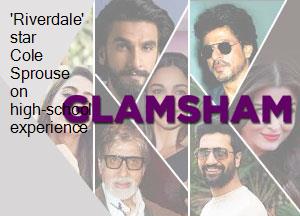 “I was working as a kid, but a lot of my friends went to public high school, so I would inject myself into situations like that. In that sense, it’s not like I missed so much of it,” Sprouse said.

The actor asserted that “Riverdale” narrated some great high-school stories.

“In terms of ‘Riverdale’, I think this year of high school stories will be great. I don’t know how much you’ll see us doing homework, but I think we’re certainly going to be playing around with that return to the season one form of a grounded high school experience,” said Sprouse, who is seen as Jughead Jones in the show.

Based on characters from Archie Comics, the show follows the story of the residents of Riverdale. The show is aired in India on Colors Infinity.

Talking about Jughead attending a new school in season four, Sprouse said: “It’s been described as a very ‘Gossip Girl’ style preppy school with Upper East Side kids – and then Jughead. He becomes part of this Dead Poet’s Society that they have going on over there and Jughead’s integration into it is based on this story of the Gargoyle King that he had submitted to this writing contest. A teacher was fascinated with his voice and took him into prep school on a scholarship, so I think it’s going to be really fun to play around with that this year. Jughead’s going to be among all these incredibly pretentious, incredibly tall and beautiful people at the prep school.”