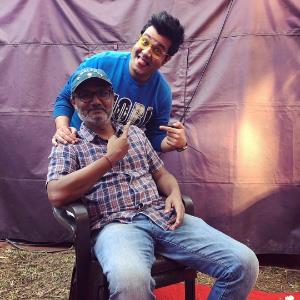 Actor Varun Sharma is happy to work with director Nitesh Tiwari in "Chhichhore". He says he has become a fan of the filmmaker's personality after having the "pleasure of knowing him".

"'Chhichhore' is really close to all of our hearts. We had a great time while making the film. It is a blessing for any actor to be in a Nitesh Tiwari film. It is every actor's dream to work with him. I am really happy that I got a chance to work with him in the initial stage of my career," Varun told IANS in an email interview.

"Chhichhore" also stars Shraddha Kapoor and Sushant Singh Rajput. It is slated to hit the screens on August 30, 2020. The film will be produced by Sajid Nadiadwala and will be presented by Fox Star Hindi.

Varun described the shooting of the film as a "great great journey".

"I have always been a great fan and admirer of Nitesh's work – whether it was 'Bhoothnath Returns', 'Chillar Party' or 'Dangal'. And with 'Chhichhore' while spending time with him, I have become a fan of him, for the person he is. He is one of the most humble and most amazing human beings that I have had the pleasure of knowing," he said.

Varun said he learned a lot about his craft through Tiwari.

"There are literally so many things that I have learned from him — within his working style, how he functions, how he works and I know that in my life those things are really going to help me and I am surely going to utilize those in future," he said.

The 29-year-old actor also has two more films in his kitty — "Arjun Patiala" and "Rooh-Afza". [IANS]