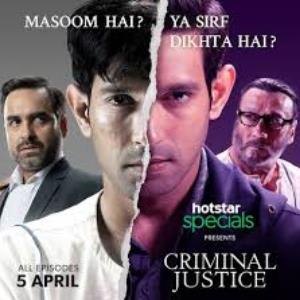 With so many OTT platforms and abundance of shows for viewers in all genres its really not easy to know who likes what, hpwever with the gorth of OTT platforms like Alt Balaji, Netlfix, Voot, Amazon Prime videos, Zee 5 and many one. One more app has started to brand their own content.

Hotstar has come up with ‘Hotstar Originals’ and criminal Justice is its second show, the show is a crime drama all of 10 episodes of 1 hour each. As it’s a crime drama apart from being lengthy it keeps us intrigued.

Having an ensemble cast comprising of ace actors, Jackie Shroff, Pankaj Tripathi, Vikrant Massey, Mita Vashisht, Anupriya Goenka and many more the show has something for the murder mystery fans!

Screen play:
Criminal Justice starts with the protagonist Aditya (Vikrant Massey) having fun while playing football, as he wins the game his friends plan a party, coming from a middle class background his expecting sister tells him to pick and drop few passengers as they rent Firstcabs service for their living.  It so happens that after dropping few customers to their destination Aditya says no to a girl named Sanaya as he is agitated and wants to head for the party, afterwhich Sanaya and Aditya make out, dance,have drugs, drinks and spend good time. Cut too we see Sanaya is brutally stabbed to death and raped!

The question is who killed Sanaya, the cute and innocent looking Aditya or someone else!

The following episodes gives in-depth analysis and the investigation supporting who killed and why she was killed? The courtroom drama is lengthy and will keep you hooked.

Talking about other prime character Pankaj Tripathi (Madhav Mishra) essays the role of a corrupt lawyer wherein he takes huge money even to settle a small case, suffering from eczema he has his own psyholigical guilt which opens in coming epsudoes.  Madhav Mishra doesn’t take a single penny from Aditya’s family and helps him  get justice he also gives angles to the case and who can forget his humour timings which makes us vouch for him. Keen observer and a sharp minded lawyer, Pankaj knows how to create an impact, From Kaleen bhiaya to  Mr Madhav Mishra he has aced his game like never before.

The plot!
As the first three episodes are character building, murder, drunk and hit case the accused (Aditya) is arrested and everything is in a jiff. The viewer’s think what next! It’s the fourth episode when the series becomes gripping. If you can withstand the ordinary with patience, the good stuff follows later on.

What happens next will surely make you believe that Truth always triumphs, the 10-hour episode shows 20 months’ journey of Aditya, his family and how he changes in these months.

Actors and characters!
Jackie Shroff plays Mustafa, Aditya’s guardian angel inside the prison and comes as a fresh breath of air. He has the bindaas bhidu’ attitude that he has imbibed in his real-life persona.

Dibyendu Bhattacharya plays Layak, a prison inmate and Aditya’s nemesis and is a heinous man, who sets his eye on Aditya from day one. Layak is a leach from day one and Jackie protects Aditya inside the prison.

Mita Vashisht, has a string powerful role as she defends Aditya case, she suddenly disappears, there could have been more to her.

Vikrant Massey as Aditya, an MBA student and part-time cab driver who gets into trouble, after what seems a harmless app cab pickup. He gets immersed in his role and gives a riveting performance. The fifth episode has his monologue as he puts his side of the story to the court. This actor can dwell into any role, his silence, his eyes, his dialogues are par excellence, from Broken but beautiful, Mirzapur to many more he outshines in every role. Vikrant Massey can give run of money to many actors. You are so engrossed by his performance, that you end up relating to his situation. His character goes in a sea of changes, as he evolves into a hardened man, from a fun loving regular person.  Vikrant goes a step bolder as he shoots for a nude scene in jail for an interrogation, and it doesn’t look vulgar tall, the necessity of the scene makes it look like it’s not forced, its ethically shot that we simply love the emotion Aditya goes through in that nude scene.

Pankaj Tripathi, one of the best actors of this country, today.  His presence in the dark scene lifts the moment instantly.Anupriya Goenka plays Aditya’s lawyer and she is another knight in the shining armour for Aditya and puts her best in saving him. Pankaj Saraswat plays the honest police officer who believes Aditya is the killer. He does complete justice to the role.

Rucha Inamdar as Aditya’s sister has a separate storyline, where she’s struggling in her marital life, helps her brother finically. She is there throughout in the episode and supports her brother. The brother-sister bond makes gets the show on an emotional angle.

Final Verdict!
Criminal justice is dark, criminal court room drama with a gripping story line, its brutal, raw, realistic, especially the jail sequences. the story line is a bit sluggish and slow as you feel things should have been rushed or omitted, the last few episodes end up suddenly, not giving out certain answers which keeps the viewing imagining what must have happened? The editing could have been refined. Nonetheless this is a bold step for Indian web audience.

Criminal Justice ends on hinting a season 2, well we are certainly hoping for the next murder case to be solved.