Will SRK, Akshay and Ajay bring back the achche din? 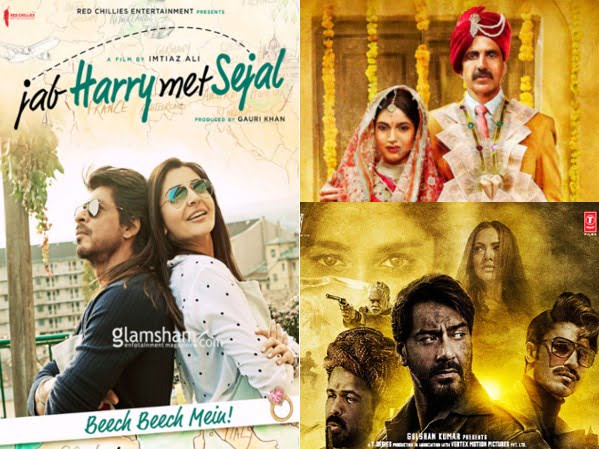 The Hindi film industry is going through perhaps one of its worse phase(s) of recent times as far as box-office returns is concerned with not a single blockbuster, let alone all-time blockbuster, during the year so far. There were big expectations from big stars like Salman Khan (TUBELIGHT), Ranbir Kapoor (JAGGA JASOOS), but both shocked the industry with poor collections.

Talking about the big stars, Shah Rukh Khan (RAEES), Hrithik Roshan (KAABIL), Akshay Kumar (JOLLY LLB 2) and Varun Dhawan’s (BADRINATH KI DULHANIA), these films were very successful (in the last two cases hit), but failed to achieve the blockbuster status or rake in the moolah as per expectations. Only unquestionable super-duper hit of the year so far is a small and low budget film, HINDI MEDIUM. So the industry still awaits a turnaround in fortunes and is looking up to big stars like Shah Rukh Khan, Akshay Kumar, Ajay Devgn to bring in the audience to the theatre in hordes once again.

From the way last Friday’s release, Anil-Arjun’s Anees Baazmee’s MUBARAKAN fared during the opening weekend, it appeared that happy days were here again for the Hindi film industry, but it also flattered to deceive.

Having said that, with Shah Rukh Khan’s JAB HARRY MET SEJAL opening to quite a good response at the multiplexes (during the dreaded morning shows!), hopes are soaring again. The Imtiaz Ali directed venture sees King Khan in his most loved romantic ‘avatar’ (which we have not witnessed off late) and its music is already making its way to the top of the charts and with Anushka Sharma, the lead heroine, one expects a good opening for the film especially in the multiplexes of metros and big cities . And word of mouth should also be positive as it is an Imtiaz Ali directed film who has not faltered much (TAMASHA notwithstanding).

Then next week witnesses an interesting release, Akshay Kumar’s TOILET-EK PREM KATHA which promotes the cause of social awareness to improve sanitation conditions and eradicate open defecation and should definitely be lapped up, more so at the smaller centres and will appeal to the mass audience of small towns and villages. The presence of Akshay Kumar (and Neeraj Pandey as co-producer) will bring in the class audience as well. The fact that it has been declared tax-free in quite a few parts of India makes it box-office prospects brighter.

1st September will see the release of Ajay Devgn’s Milan Luthria directed BAADSHAHO. The heist action thriller period drama is sure to set the box-office on fire . The promos are already being liked and the late Pakistani legend Nusrat Fateh Ali Khan composed number, ‘Mere Rashke Qamar’, which has been recreated and is already a chartbuster even before release.

Well, here’s hoping that the achche din for the industry, which ceased after BAAHUBALI 2, are here once again!