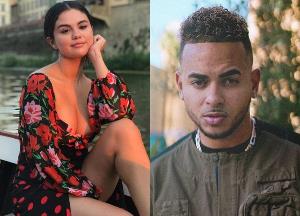 The singer teased that they might have something up their sleeve during the event in Las Vegas on Thursday.

Also Read: Selena Gomez and Julia Michaels take their friendship to the next level

The two have previously worked together for DJ Snake's "Taki Taki" which also featured rapper Cardi B.

On his collaboration with Selena Gomez, Ozuna said it's incredible. "She is someone that you would never expect to work with. She's is such a big star and very respectable person and an excellent human being."

Ozuna represented his genre which is nominated for a Latin GRAMMY Award in the Best Urban Song category for "Baila Baila Baila." The singer took to the stage last night and said his performance will show the evolution of reggaeton.

"Reggaeton, tonight and every night, is very special because it keeps evolving, it's unifying, we keep collaborating. We make sure that it continues to grow. It continues to evolve with its rhythm, between the producer and artists," he said. "This night you will see the evolution of reggaeton mixed with what is general music."