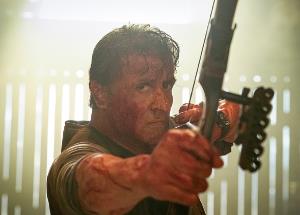 Sylvester Stallone is returning as Rambo once again in Rambo: Last Blood, the fifth installment of the cult classic. The film is directed by Adrian Grunberg with Matt Cirulnick and Sylvester Stallone writing the screenplay.

Stallone last played the role of John Rambo in 2008’s Rambo 4, which was also written and directed by him. We just live in hope that Last Blood won’t mark the climax of this stellar action franchise like the title suggests.

For Sylvester Stallone, returning to Rambo was an opportunity to explore some unexpected facets of the character. Sharing his experience working on Last Blood Stallone says, “You try to think of something that is relatable to the audiences. In Rambo 2 it became a one-man show, basically him showing his prowess and the same thing under the third one. This one is truly trying to find an end, where does a warrior go.”

“He realizes that his job is to protect and that’s the only thing he is good for. But he knows if he’s pushed if something happens as traumatic, he is going to revert back and that’s the last thing he wants.

Along with the veteran war actor Slyvester Stallone, ‘Rambo: Last Blood’ has an ensemble cast of Adriana Barraza, Oscar Jaenada, Paz Vega, Joaquin Cosío and many other insignificant characters. The film is directed by the ace – Adrian Grunberg. ‘Rambo: Last Blood’ will be releasing on 20th September by PVR Pictures and MVP Entertainment.