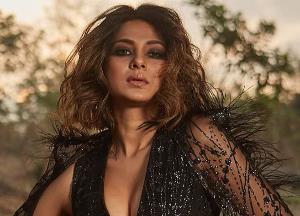 Actress Jennifer Winget, who will be seen in the second season of "Beyhadh", has said that the upcoming romantic drama thriller series is going to be darker, scarier, crazier and more intense.

Jennifer was interacting with the media at the lunch of 'Beyhadh 2' along with his co-actor Ashish Choudhary on Monday in Mumbai.

The actress gained success with the 2016 show "Beyhadh", where she plays Maya, who is obsessed with her husband. The show saw her in a negative role for the first time, and it soon became popular. Now, the show is getting a reboot. "Beyhadh 2" will feature Jennifer as Maya, along with actors Shivin Narang and Ashish Choudhary.

In the new promo that was released on Internet, we see Jennifer in a really intense avatar. The promo starts with a shot of an archaic clock with Maya saying that she is now in charge of people's time.

Talking about the show, Jennifer said: "The first season was all about Maya's obsession with love, and in the second season it is all about her obsession with revenge. I can assure that season two of 'Beyhadh' is going to be darker, scarier, crazier and much more intense."

"Beyhadh 2" is going to replace Amitabh Bachchan's quiz show "Kaun Banega Crorepati" on Sony TV. Asked of she is feeling any pressure, Jennifer replied: "I think you do feel pressure but our team is really good and we take pressure in a positive way."

"When we posted a picture of 'Beyhadh 2' on social media for the first time, the response we got was special. It was then that it really sunk in me how big 'Beyhadh' is. I think that pressure motivates us to do a better job."

The show will air from December 2.