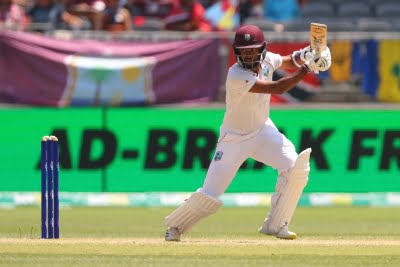 Perth, Dec 3 (IANS) Captain Kraigg Brathwaite smashed a sensational century to lead his team’s fightback and inject some hope for a win against Australia on the fourth day of the first Test at Optus Stadium, here on Saturday.

West Indies, who have been on the back foot for the major part of this Test match, now need 306 runs on the final day to win the match with seven wickets in hand. They were 192/3 off 62 overs at stumps on Day 4 with Kraigg Brathwaite (101) and Kyle Mayers (0) not out at the crease.

Beginning the day, Marnus Labuschagne continued to hurt the West Indies. While David Warner (48) failed to score big, Labuschagne took on the West Indies attack and hit a flurry of boundaries to bring his century in quick time just before the lunch break.

Australia declared their second innings at 182/2 off 37 overs at lunch with Labuschagne (104 not out) and Steven Smith (20) at the crease. With his ton, Labuschagne became just the third Australia batter after Greg Chappell and Doug Walters to score a double century and century in the same Test.

Chasing a huge target of 498 to win, the West Indies made an excellent start with the bat. Tagenarine Chanderpaul showed plenty of composure and Brathwaite was at his best as well at the other end and they together frustrated the Australian attack.

Australia introduced Nathan Lyon quite early to find a breakthrough but it wasn’t his day either. Both Windies batters were well in control but the run rate was just hovering around 2.

However, things slowly changed post-tea. Mitchell Starc finally clean-bowled Chanderpaul for 45 and Lyon got rid of Shamarh Brooks (11). At the other end, Brathwaite though looked unperturbed and went on a boundary spree at one point in time that boosted his strike rate.

Eventually, he reached his top-class hundred but the visitors were jolted immediately in the same over when Jermaine Blackwood (24) was dismissed by Lyon.

A score of 497 is usually defended for most of the time in Test cricket but with Brathwaite bringing the equation down to 306, one wicketless session might change the course of the contest on Day 5.