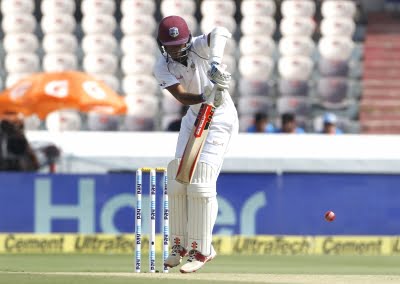 Antigua, April 2 (IANS) West Indies captain Kraigg Brathwaite came very close to a second century in the second Test which helped his team get to a commanding position against Sri Lanka on the fourth day.

The experienced opener followed his 126 in first innings with a patient 85 in the second which, along with half centuries from Kyle Mayers and Jason Holder, allowed Brathwaite to declare at 280/4 — setting the visitors a target of 376 at the Sir Vivian Richards Stadium. Holder was 71 not out, having shared a 53-run partnership with wicketkeeper Joshua Da Silva who was unbeaten on 20.

West Indies then had 40 minutes to bowl before stumps and Sri Lanka managed to not lose any wickets, reaching 29/0. Captain Dimuth Karunaratne scored 11 runs and Lahiru Thirimanne scored 17. They will resume on Friday with another 347 runs needed for victory while West Indies will be hunting 10 wickets in 98 overs.

Sri Lanka started the day at 250/8 in their first innings and the home side took just over three overs to wrap up the innings at 258, thus taking a first innings lead of 96 runs. Pathum Nissanka, on 49 overnight, completed his half century from the fifth ball of the day, but was out soon after for 51 — caught by substitute Hayden Walsh Jr. at deep backward square from the bowling of Kemar Roach.

When West Indies batted a second time, Mayers went on to score a half century from 63 balls, with eight fours, before eventually falling lbw to fast bowler Suranga Lakmal for 55. Brathwaite reached his 21st half century from 137 balls and looked set to reach centuries in both innings when he went on to 85 which came off 196 balls and included four boundaries. Holder played a number of outstanding shots and paced the innings well with his half century requiring just 69 balls.