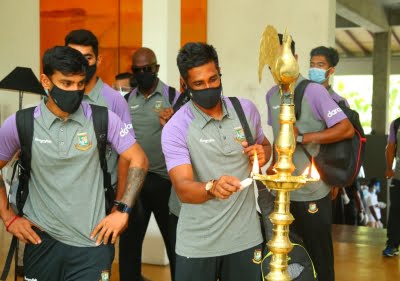 Colombo, April 12 (IANS) A 21-member Bangladesh squad, with three new faces in Test reckoning, arrived in Colombo on Monday to play a two-match Test series in Kandy from April 21.

The touring side, which will remain in a bio-bubble, will play a two-day warm-up game in Katunayake before heading to Kandy where both the Tests, which are a part of the World Test Championships, are scheduled.

Bangladesh had earlier announced a 21-member preliminary squad for the tour, with the return of Shuvagata Hom to the side. The uncapped pace trio of Shoriful Islam, Mukidul Islam Mugdho, and Shohidul Islam, have received their maiden call-ups after an impressive domestic season.

Shuvagata Hom last played international Test cricket in 2016 against England at home before being dropped. He has been recalled for his all-round abilities after showcasing consistency at the domestic level.

Bangladesh will announce their main squad for the series after the April 17-18 warm-up game. The Bangladesh Cricket Board (BCB) chief selector, Minhajul Abedin, has said that 21-member preliminary squad will be pruned down to 15 after the warm-up game.

“We have decided to take the preliminary squad to Sri Lanka as it would help our preparation and also give exposure to a number of players who are in our thinking for the longer version going forward. The squad for the Test series will be announced after our inter-squad warm-up game,” said Abedin.

In 2017, when Bangladesh toured the island nation, they beat the hosts for the first time in a Test to level the series 1-1.

Twitter
Flip
Koo
Previous article
Hooda, Rahul take Punjab Kings to 221/6 against RR
Next article
CSK show they are in high spirits despite loss to DC
This May Also Interest You
Sports