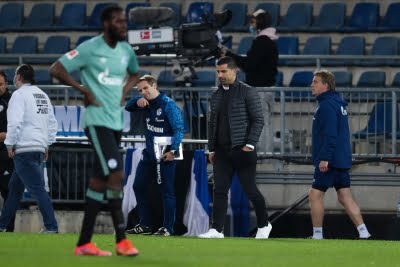 Berlin, April 21 (IANS) Bayern Munich moved within one victory of a record-extending ninth straight Bundesliga title with a 2-0 victory over Bayer Leverkusen while 10-man Schalke were relegated after losing 1-0 at Arminia Bielefeld.

Eric-Maxim Choupo Moting and Joshua Kimmich were on target for Bayern in the opening 13 minutes on Tuesday, DPA reports.

Bayern moved 10 points clear of RB Leipzig, who crashed 2-1 at second last Cologne, and can wrap up the title with three games left on Saturday against lowly Mainz.

Cologne’s win also meant that bottom side Schalke needed a victory to delay a fourth drop following 1981, 1983 and 1988 but Fabian Klos’ winner for Bielefeld sealed their fate.

Playing their first game since Hansi Flick had announced he wanted to leave in summer, Bayern made their presence felt immediately against Leverkusen.

Choupo-Moting, standing in again for top scorer Robert Lewandowski who has back in team training from a knee injury and expected to play again on Saturday, smashed the opener into the roof of the net seven minutes into the game.

Kimmich got the second six minutes later when he rifled into the top left corner from the edge of the area.

Bayern controlled the game with Choupo Moting denied a second by the offside flag while Leverkusen’s best chance came when Karim Bellarabi was denied by the crossbar.

“We are very close and even though the season wasn’t perfect we can now take the league title,” Kimmich said. “The coach deserves that we do our best for him. We had the most successful period in the past year and a half.”

The win put Bayern on the brink because Leipzig faltered again after a 0-0 home draw Friday against Hoffenheim.

Former Germany defender Jonas Hector headed Cologne ahead less than a minute into the second half, and got the second with a low shot on the hour, a minute after Amadou Haidara smashed Leipzig’s equalizer.

Cologne, who ended a run of nine games without victory in the second game under new coach Friedhelm Funkel, remain second-last but are now tied on points with Hertha Berlin in the relegation play-off spot.

Bielefeld, meanwhile, moved four points clear of the danger zone with their victory from Klos’ 50th-minute effort against a Schalke team which had Thiaw dismissed in the 71st before Klos missed a penalty on the other end.

The 21st season defeat clinched the drop for Schalke who were Bundesliga runners-up in 2018 but have been free falling since January 2020, winning just two of the last 46 league matches since then and garnering a mere 13 points this season.

“We knew what we were facing. But knowing it is over is brutal. I have been in this club for more than 20 years. It is tough,” Asamoah said.

Bielefeld moved two points ahead of Augsburg who lost 2-0 at Eintracht Frankfurt from headers by Martin Hinteregger and Andre Silva which saw the hosts climb into third for at least 24 hours.

Four more games are set for Wednesday while Hertha’s match against Freiburg is one of three games they have seen postponed owing to two-week team quarantine after several positive coronavirus tests.