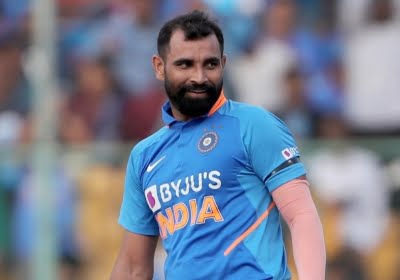 New Delhi, April 1 (IANS) Pacer Mohammed Shami, who is gearing up to return to competitive cricket with Punjab Kings in the Indian Premier League (IPL), says the recent competition in pace bowlers’ spots doesn’t put pressure on him and doesn’t make him redundant.

Shami, who has recovered from a forearm fracture he suffered in Australia in December, added that competition for places instead bodes well for the Indian team, as they have a variety of bowling options to choose from. He feels his own experience and different skills-set give him confidence to make a comeback to the Indian team.

“Your selection depends on your skill, experience and performance. All things are different. If there is healthy competition, it doesn’t mean that you lose confidence in yourself,” Shami told IANS on Thursday.

“It is not like competition puts pressure or makes someone redundant. Every player’s skills-set is different, they are required for different roles in the team. We don’t think about ourselves, we have to think about the country. Whoever is the best [for a given situation or match] gets to play and is selected,” he added.

“Competition keeps coming and going. How much you play depends on your luck and how your fitness is. You have only one thing in your hand and that is, keep working hard and keep supporting each other [in the team]. That is all you can do,” he said.

Shami was hit by a Pat Cummins’s delivery on the third day of the first Test against Australia in Adelaide where India were bowled out for 36, their lowest total in Test cricket. Shami was the last man but couldn’t return to bat as India’s second innings folded at 36/9.

Since then, a resurgent India found many pace bowling options in Mohammed Siraj, T. Natarajan, and Shardul Thakur among other regular bowlers. They all performed well.

Shami, who was part of the India trio comprising Ishant Sharma and Jasprit Burmah that wreaked havoc in 2018, picking 136 wickets together in that calendar year, has barely spent time at home during the break. He was recuperating and regaining fitness at the National Cricket Academy (NCA) in Bengaluru and could spend about eight days at home.

“My recovery has been good and I am fine. I was at the NCA, where I completed rehab. For the past one to one-and-a-half months, I did my rehab, practiced there and bowled at full throttle,” he said.

“It was unfortunate that I got injured. Everything happens for good and for a reason. For me, it is nothing to worry about. You have to see everything positively. Whatever your skills are, you have to focus on them.”

The 30-year-old bowler, who picked 20 wickets in 14 matches in IPL 2020, has just come out of quarantine and has begun practicing with the Punjab Kings players.

“I have just got out of quarantine. Practice was going on from earlier. I have just started that with the team. We have 10-12 days (Punjab play first game against Rajastha Royals on April 12) left. We will have a few sessions,” added Shami.

The fast bowler said that the period away from competitive cricket and recovery, was spent working on the basics.

“I always work on my basics, whatever the tournament or series. I see what condition I have play in. It is not like that I have to play with pressure or develop something new [when coming back from a break to keep myself relevant]. Whatever is my stock, I work on that,” he added.

The Bengal bowler, who comes from Moradabad, said that variations and using one’s skills to the optimum will be key. He wasn’t surprised with the way variations were put to good effect.

“We have to study the situations in a match and you work according to that. You can’t plan beforehand, because you don’t know the situation on the day.”